White House Press Corps Not A Corpse (Yet) 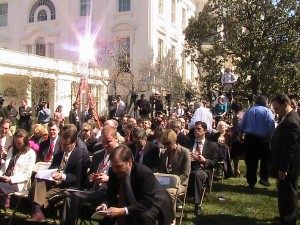 When I first saw Lloyd Grove‘s version of the now-annual effort to autopsy the White House press corps, I rolled my eyes in agreement with Glynnis MacNicol.

Then, I noticed that not one of the 3 C-Spans, nor any other news outlet, carried yesterday’s briefing. Heh, neat coincidence. No biggie. The timing’s a little weird, but these things happen.

Still, before this gains any more traction, allow me to make the case for the press corps to the writer of next year’s “Press Corpse” piece, and anyone else who’s interested.

There is some validity in what Grove writes. Indeed, many of the White House reporters I’ve interviewed have observed that Press Secretary Robert Gibbs‘ main mission is not to “commit news” during briefings, a mission for which he is uniquely skilled. White House briefings are the classic battle between an unstoppable force and an immovable object, a game of inches that can be infuriating to both “teams.”

The Daily Caller’s Jon Ward, among others, has noted that he often feels like his time would be better spent hitting the streets, rather than sitting in the briefing room. In the modern world of profit-driven journalism, this can be tough to argue with. Most of the news “broken” at briefings is of the “He said what?!?” variety that moves the news micro-cycle, and it is immediately available to everyone.

However, the WH press corps serves important functions other than to break news. Jon is an excellent example of one of these, which is that the street goes 2 ways. White House reporters can have an influence on the administration. Ward discussed  a piece he wrote for Daily Caller in which he examined the White House’s image-making apparatus, including the observation that the President’s modus operandi of giving all of his speeches in front of a blue curtain and some flags made it difficult for people to differentiate them. Damned if I didn’t see the President on TV the other day speaking to factory workers in front of stacks of boxes in a warehouse.

We also act as the media’s collective memory. Much of what we do consists of getting the administration on record. For example, when I asked Gibbs about the PhRMA deal last June, his answer didn’t even merit a mention on my blog. However, when more facts emerged about the deal, that exchange gained in importance.

The press corps can also apply pressure on the White House in ways that others cannot. The President may not waste his time watching cable news, but you can bet he hears from Gibbs every day.

For example, last spring, many of us, including the last person to declare the press corps obsolete, began to press Robert Gibbs on the issue of “Don’t ask/Don’t tell.” The Advocate’s Kerry Eleveld has kept up the pressure ever since, giving voice to a minority desperately in need of one.

We also spent the better part of last year trying to nail the administration down on the public option, from which we can now gain valuable insight into the policy vs. politics calculus of this President.

Finally, the notion that the White House press corps could be replaced by the administration’s own “unfiltered” media operation is not only absurd, it’s downright dangerous. As a competitor to the press corps, the White House’s website, video releases, and official photographs are, at best, useful supplements. As a replacement, they are, as Jake Tapper noted, inferior products. Worse than that, though, for all the right’s bleating about communism, a corps-less White House would be little different from the Soviet-era Kremlin, with WhiteHouse.gov as its TASS.

As Glynnis also noted, technologies like Twitter cut well in favor of the press corps, completing a perfect marriage between journalistic uber-tweeters like Jake Tapper and Mark Knoller, and the highly engaged, politically voracious Twittersphere. Even late bloomer Major Garrett has become a Twitter superstar, and former skeptic Chuck Todd is now a believer.

There are valid criticisms to be made of the press corps. David Shuster noted that often, the dominant first 2 rows will all ask the same 3 questions, driven in part by the need to “get the shot.” Many reporters, including front row residents, have suggested spreading the wealth around, question-wise.

By and large, though, most agree that this is an exceptionally good group of reporters, and maybe that’s the problem. Unlike the Bush years, it is becoming increasingly difficult for administration critics to claim that the press corps is taking it easy on Gibbs. On the other hand, many fervent supporters of the Obama administration make a second (or first?) career out of “working the ref,” accusing White House reporters of biased questioning. Maybe it would be easier for both groups if they could just wish us out of existence.

This is also not a group of shrinking violets. We push back often, and hard, at the White House’s attempts to restrict or manage the press. Instead of asking whether the press corps has a problem, perhaps Grove should have perused a sampling of the White House’s press schedules. Off the top of my head, I would say that about 90% of the President’s schedule consists of “closed press” events, and the majority of the rest are pooled press only.

So, next year, when it comes time to write about the White House press corps again, hopefully the prognosis will be rosier, and the focus will be on how we can do better, and how the administration can do better by us.