Why Are Republicans Enforcing Obama’s Mandate?

Why Are Republicans Enforcing Obama’s Mandate? 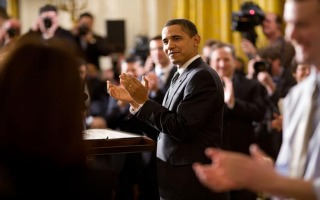 When he was not demonizing his Republican opposition as being fundamentally opposed to menstruation and pro-poverty, President Barack Obama campaigned on a single policy proposal — raising income taxes on relatively wealthy Americans. Republicans in Congress, particularly those in the hallowed upper chamber, seem happy to advance the president’s agenda.

President Obama wants to do whatever he can to avoid expending any political capital on the resolution of the impeding fiscal cliff. He does not have much to spend and his administration’s legacy will be minimal if it hinges primarily on a change in the nation’s regularly fluctuating tax rates. Republicans should be forcing the president into the public square — every ounce of political clout spent today is influence that cannot be spent by a lame duck president on advancing a progressive agenda.

“Let me put it to you this way: I earned capital in the campaign, political capital, and now I intend to spend it,” George W. Bush told members of the press following his reelection in 2004. Why did he feel it was necessary to remind the nation, and a hostile political media, that he had political capital to burn? He knew his adversaries were going to make him work to advance a Republican agenda.

Democrats, meanwhile, made it clear that they had every intention of frustrating the president’s legislative aims. Even then Senator-elect Obama wrote that Bush’s narrow reelection victory was a mandate for moderation and compromise.

Bush was not reelected with a devastating crisis looming in the immediate future — one that must be resolved now, but will likely only be comprehensively addressed at the last minute. Republicans in Congress are doing their party and their beliefs a disservice by doing the president’s groundwork for him. Obama has acted as an executive behind the scenes, speaking with members of Congress in what is, presumably, an effort to reach an accommodation between members of his party and the opposition. In public, however, the president has acted in a familiar fashion; he has kept his head down and avoided the nasty public feuds that members of Congress are having on the Sunday news programs.

The Republicans were well served by President Obama’s public efforts to pass his signature health care reform bill in 2009/2010. They forced the president to make his case to the public. With each speech, the president’s stock dropped and his ability to advance transformative legislation went with it.

A marginal increase in the nation’s income tax rates will not serve as Obama’s legacy — tax rates are too often subject to change by future Congresses and administrations. Though a change in the capital gains rates may indeed have staying power and serve as more than a footnote when historians write the book on Obama’s presidency, but the president did not campaign on an increase in the capital gains rates and a public relations effort will be required to boost taxes on the nation’s grandparents.

Obama will seek sweeping social legislation to cement his legacy as a progressive president. That will require a bigger mandate than he presently has and more arm twisting of members of Congress than he appears comfortable with based on the hands off approach of his first term. Republicans should make every effort to make the process of advancing progressive reforms difficult for the president. At present, they are bending over backwards to resolve the fiscal cliff on the president’s terms while Obama maintains a low profile.

The media will attack Republicans for their intransigence. They will say the GOP is ignoring the will of the voters. Let them. The Republican party and the nation will be better served by a recalcitrant GOP, eager to protect Americans’ incomes and the country’s traditions, than they will be by appeasing the demands of an excitable and ever-agitated political press.

The Democrats made Bush work for his legacy and the verdict on his second term was decidedly mixed. The last president’s legacy was wholly formed in his first term. Republicans should learn the lesson of Bush’s second term and make Obama work for it.