Your Inside Peek At CNN’s Documentary About Obama’s Final Days in Office, The End

Tonight, CNN will premiere an original documentary that has been two and a half months in the making, but has also sort of been eight years in the making.

Titled The End, the film takes a peek into the White House during President Barack Obama‘s final weeks in office and features interviews with Press Secretary Josh Earnest, the First Lady’s Chief of Staff Tina Tchen, the President’s Director of Screenwriting Cody Keenan, and many more.

Producers Susan Chun, Amy Entelis, Courtney Sexton and Toby Oppenheimer worked to get permission to be at the White House for an almost unprecedented two and a half months. 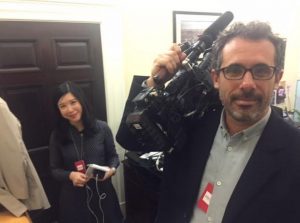 The documentary took an interesting turn when Donald Trump won the election, which sent the Democratic team in the White House down a transitional path they were not expecting. In an interview with Mediaite, Chun revealed that the unexpected results were shocking and changed the anticipated story arc of The End dramatically. The focus shifted from a retrospective celebration and optimistic look at the change of power to how a transition between two very, very different administrations would play out.

“In the early days, everyone [featured in the film] had anticipated that Hillary Clinton would win and they saw this as a legacy piece where they could talk about the work everyone had done for eight years. After the election, it was, ‘Yes, it’s about legacy, but we want to make this a peaceful transition. We will do our best to hand over the government,'” Chun said.

The bulk of the film highlights the struggles associated with a peaceful transition.

Max Stier, Founding President and CEO of Partnership for Public Service, said during his interview, “No one tells you [the transfer of power] is peaceful but ugly.”

Chun explained that one of her greatest takeaways from the project came from the interview with Jen Psaki, the White House’s current communications director. Psaki summed up that while everyone in the Obama White House wants to see their Trumpian counterpart succeed professionally, they don’t want to see the associated Trumpian policies succeed as a result.

“It’s a weird middle ground where they want to help but know as soon as they are out of office, they will spend the next years fighting against what [the Trump administration is] doing,” Chun mused. “That tension is something I want people to take away.”

It certainly is something  people can take away from the documentary. There is one example where it is more than palpable. During one scene, the First Lady’s Chief of Staff Tina Tchen makes the rounds to greet attendees at a breakfast. Multiple attendees make disparaging remarks about Trump or indicate that they are fearful for the future. Tchen just smiles, stays professional, and tells them everyone will stay strong and face the future together.

Later, to the camera, she says, “Private citizens have the luxury of being emotional. Public servants don’t.”

That commitment to a peaceful transition is evident in the interviews, but so, too, is the sadness that comes with handing over the White House to the opposing side.

Watch above to see an exclusive clip of a speechwriting meeting. For the full feature, tune into CNN tonight, January 18, at 9:00 p.m.