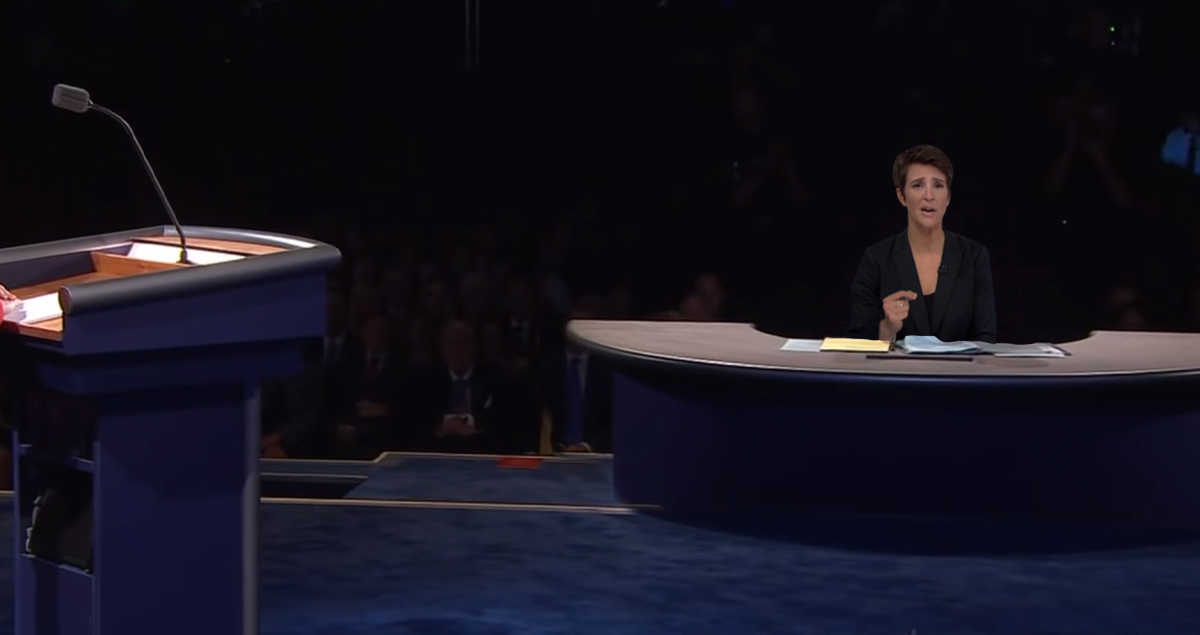 MSNBC would probably still object to any suggestion that their news coverage is partisan, that it is liberal and progressive and opposed to Republicans and conservatives. That’s the kind of thing a business, and it is a business, has to do. They disclaim.

But MSNBC is lefty, and Fox News is righty, and water is wetty. It doesn’t mean they can’t or don’t have news people who can be good debate moderators. Or at least, that can perform the task referred to as “debate moderator” as it applies to the pseudo-debate format we’ve all come to accept in politics.

But even when a place like Fox News hosts one, which they have many times in the past, they are selective about which personality from the network sits in the chair. To put it in a shorthand version any viewer of cable news or politics will be familiar with: You go to the debate with Chris Wallace, not Sean Hannity.

Now, although I am on the right, I assure you that I agree with any knee-jerk response that MSNBC’s Rachel Maddow is no Sean Hannity. That’s true. No matter how friendly her show is to the left or how soft her interviews or how viciously anti-GOP, Maddow isn’t an advisor to, you know, the president and head of a party. She doesn’t essentially work as part of a campaign. Hyperbolically, a conservative may object that she works for all Democrat campaigns, like everyone at MSNBC, but objectively that’s just not the case. She doesn’t literally work for a particular politician. Hannity almost literally does. It’s different.

Also, even by the standard of her own network, Maddow isn’t the leftiest of the left-wing partisans. That job belongs to Lawrence O’Donnell. Rachel Maddow is not just not Hannity, she’s not O’Donnell. He, on the other hand, is a kind of Hannity. Loud, hyper, given to exaggerated performance, prone to interruption, and most of all, just really, really angry a lot.

To put it in a shorthand version any viewer will recognize: You go to the debate with Chuck Todd, not Lawrence O’Donnell. That is, if you want to be seen as a press outlet that is asking candidates questions on behalf of all the people, and not just on behalf of Democrat voters.

But do you go in with Maddow? MSNBC is. And the question has come up, and I’m bringing it up here: should they?

You can of course argue that a good partisan jouster on stage helps refine a debate, but that would be much more the case if they were oppositional rather than friendly. That is to say: a conservative opinion host at a Democrat debate, a liberal opinion host at a Republican debate.

Although in Maddow’s particular case, that wouldn’t be ideal either, considering the increasingly frenetic tone and even carelessness in her partisan coverage of the Trump administration, particularly the Mueller investigation.

Still, with all those caveats and asides, it’s fair to acknowledge that there is at least a case one could make that someone who is policy-focused first, and journalism-focused second, is handy to have around when probing candidates on policy. Especially when that person is, like Maddow (and as opposed to some of the names above), capable of maintaining a continuous and coherent line of questioning in order to get an actual answer from someone. Even some “straight news” reporters lack that skill.

In short, there are a lot of ways you could theoretically argue that the obviously ultra-liberal and extremely partisan Democrat opinion host and commentator who is not a reporter or part of the news division Rachel Maddow could still bring something to the table at a debate among Democrats. And there are also plenty of arguments against. But there’s another, more recent development that tilts the argument to not bringing her on stage. How bad would it look for them to have a debate moderated by someone that even the vaunted ultra-liberal New York Times has deemed too partisan for their own reporters to appear with?

There is only so far, a network arguing itself as objective press (winks or not), can go without looking ridiculous, and only so far the Democrats can go without looking like hypocrites. And with Maddow, it is probably too far to go. While Democrats are refusing Fox News appearances and town halls and debates on the basis that Fox is too partisan and not objective and basically in the tank for Trump, MSNBC is presenting itself as not that, not biased.

But the New York Times apparently disagrees, at least when it comes Rachel Maddow. And it’s a stance they are maintaining, despite major backlash from CNN and MSNBC, including a meeting largely about Rachel Maddow, reportedly.

MSNBC president Phil Griffin reportedly sat down with New York Times executive editor Dean Baquet in an effort to get the paper’s journalists back on The Rachel Maddow Show amid what is said to be a Times-implemented ban.

According to a report from CNN’s Brian Stelter, Griffin and Baquet sat down last week for a “lengthy lunch.” But Stelter — reporting through four sources with knowledge of the meeting — states that the situation remains at an impasse.

Maddow, though, is still on the slate as a debate moderator — and this, surely, was a big part of the reason behind the Griffin-Baquet meeting. Phil Griffin seems to be seeking the New York Times seal of approval for his network’s 9 p.m. star.

How bad will Democrats look, and MSNBC look, for including a debate moderator for the Democrats who is herself not only a partisan Democrat, but so slanted that even the New York Times feels their reporters need to steer clear so as not to be tainted? Pretty bad.

There are subtleties to what makes a good debate moderator, and it’s silly as a notion to simply say “I don’t want to be asked questions by a partisan” (cough Democrats cough). But appearances matter, and this would be a bad look. And actually challenging Democrats to answer for policy from the perspective of voters who aren’t as far left as MSNBC’s line-up matters, too. Those two factors, and the New York Times’ apparent verdict on Rachel Maddow, outweigh any more prosaic arguments about style or ability.

In short, while Maddow is off the Times list, it seems clear it would be better if she were off the moderator list, too.