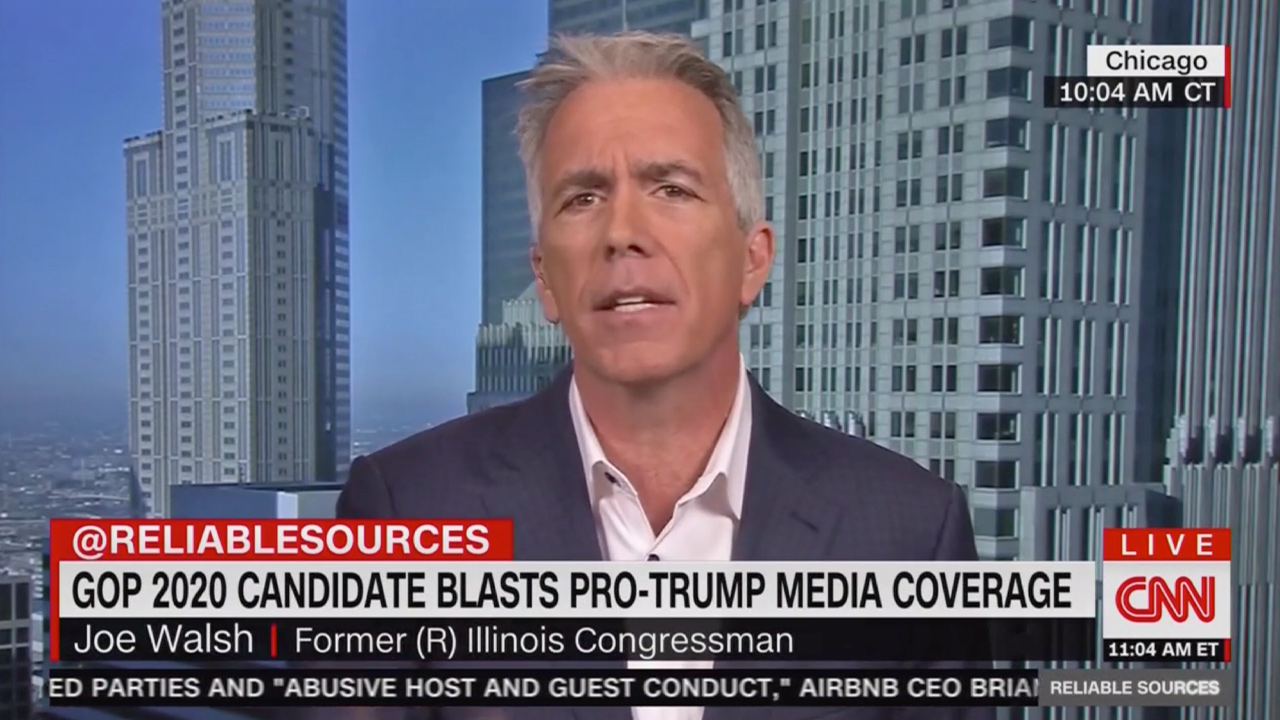 Yesterday, I did an extensive interview with GOP presidential candidate Joe Walsh for my podcast about the Trump presidency. Walsh, a former Republican congressman, a friend and someone whom I informally advised around the time of his presidential announcement, was on his way to New Hampshire to campaign, and, as usual, he did not hold back.

Even by Walsh’s normal bomb-throwing standards, he had a lot of explosive things to say. For instance, he intermittently referred to President Trump as “a traitor,” and a “son of a bitch,” who colluded with Russia during the 2016 election and should be removed from office. But perhaps his most fascinating barbs were directed at his former Republican colleagues in congress who are humiliating themselves in an explicit effort to protect Trump from the ongoing impeachment process.

Walsh castigated his former fellow Republican House members for not one of them, even those who are retiring, having the guts to simply vote for the impeachment inquiry to officially begin. But Walsh didn’t just stop at general criticism for Republican lawmakers, he also named those who thinks are the worst offenders of Trump sycophancy with regard to impeachment.

The ex-congressman specifically voiced wrath for Nikki Haley, Rand Paul, and Lindsay Graham for their hypocritical and nonsensical defenses of Trump’s outrageous behavior which has led him to the brink of being impeached. But most surprisingly, Walsh also went after his good friend Rep. Jim Jordan who has been more overtly obsequious towards Trump, and willing to jump on more political hand grenades for him than just about anyone.

“I know for a fact that Jim Jordan knows that this was very wrong,” said Walsh, referring to Trump’s effort to get the Ukrainian government to announce an investigation into Joe Biden in exchange for the ally actually receiving the military aide which the Congress had approved for them. Interestingly, Walsh agreed with me that the heart of why Jordan is so willing to embarrass himself on behalf of Trump is the president’s support of him in the wake of news reports implicating the former college wrestling coach in the alleged “Ohio State Athletic Doctor Scandal,” which Walsh and I still strongly believe is a fraudulent narrative.

Our entire conversation about impeachment is well worth a listen, but we also delved deeply, and quite frankly, in to the struggling state of his longshot presidential campaign against an incumbent president who is still very popular among Republicans.

Walsh admitted that, thanks primarily to fears of upsetting Trump, fundraising for his campaign has lagged behind what he had hoped, or expected. He also expressed frustration that, after a campaign launch which got even more media attention than had been anticipated, the news coverage of his efforts, partly because of the hyper-focus on impeachment, has dramatically waned.
Walsh also attacked Mark Sanford, one of the three non-Trump candidates in the GOP race, for not dropping out because he is way too soft on Trump. “Sanford has no business being in this race,” Walsh told me, “he is not a serious candidate.”

The former Illinois congressman and radio talk show host also ripped the Republican Party in several states, including South Carolina, for being so afraid of opposition to Trump embarrassing the “king,” that they have, an act so brazenly anti-democratic that it might make even Vladimir Putin blush, canceled the primaries.

Walsh revealed that his primary campaign strategy is to put all of his chips on the gamble that he can break from the pack, and make this a legitimate race, by getting more than 20% of the vote in the Iowa caucuses. I took him to task for what I perceive to be a naïve view of how possible that scenario is in a caucus, where Iowans would have to publicly face their “Cult 45” neighbors to vote for him, rather than do so safely in the secret ballot of a primary.

Finally, I asked him about whatever happen to a very specific idea I had, and about which we and his staff met, for the campaign to create online videos humorously mocking Trump (he cryptically told me to “stay tuned”). He also made it clear that, despite all the difficulties of swimming against such a strong Republican tide, that he is glad he made the decision to risk everything in order to do what he thinks is right.

The entire interview can be heard at this link.