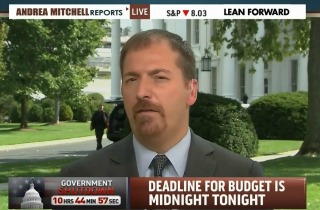 On Monday’s Andrea Mitchell Reports on MSNBC, NBC News’ Chief White House Correspondent Chuck Todd predicted that a last-minute resolution to the continuing resolution crisis will be reached because the House Republicans will cave. He said that, unlike even in 1995 – 1996, the GOP is presently “bluffing” and will capitulate.

Asked by Mitchell if the White House would budge off its insistence not to negotiate over the continuing resolution or the debt ceiling increase, Todd answered that they would not. He noted that the administration sees no benefit in negotiating with the GOP at the moment.

RELATED: GOP Reps Call Out CNN Anchor in Battle over Shutdown: ‘Whose Bidding Are You Doing?’

Revisiting the 1995-96 government shutdowns, Todd remarked that President Bill Clinton was in a less politically advantageous position than the one President Barack Obama occupies today.

“I know [Rep.] John Boehner (R-OH) has made this argument and case to some of these new conservatives who have no idea what happened in ’95 and why things went south for the Republican Party when they actually had kings and aces in their hand,” Todd said. “On this one, they don’t have a good hand to play.”

“They are bluffing,” he added. “They got nothing.”

This is why, Todd concluded, that he thinks a short-term resolution which funds the government for about a week is the most likely way in which the present standoff will resolve itself.