CNN Debate: Marriage Amendment Popular Among GOP Candidates, But Not The Ones You’d Think 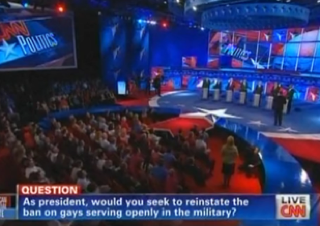 If there is one way in which today’s CNN debate differed dramatically from Fox News’ debate several weeks ago, it is that the absence of Gary Johnson and the inclusion of Mitt Romney and Rep. Michele Bachmann made the field far more socially conservative. Case in point: most of the candidates on stage support Don’t Ask Don’t Tell, and only one would oppose a constitutional amendment to ban gay marriage.

Taking a question from the audience, Rep. Bachmann began the gay marriage discussion, answering that she would not want to overturn a state law if the majority of the state voted for it. “I don’t see that it’s the role of a president to go into states and interfere with their state law,” she noted, while adding that, personally, she believed “the best possible way to raise children is to have a mother and a father in their lives.” With that answer, moderator John King then turned and asked each candidate in turn whether they would support a constitutional amendment to define marriage. Every candidate on stage save Herman Cain and Ron Paul supported it, though the latter argued that “government shouldn’t give us a license to get married at all,” gay or straight. Even Bachmann supported the amendment, citing the fact that an Amendment would require state ratification such that she would not see it as an intrusion. Newt Gingrich and Tim Pawlenty were more militant in their answers, Pawlenty touting his work in Minnesota on the matter and Gingrich his work in passing the Defense of Marriage Act.

The candidates also answered questions on Don’t Ask Don’t Tell, with Cain notably arguing that he would have kept DADT in place had it not been repealed, but wouldn’t fight it now because there are “more important things” to worry about.