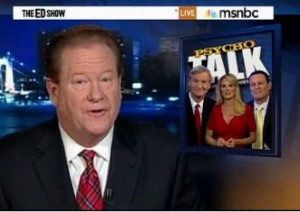 The first story Schultz raised his eyebrow at was a report that the Environmental Protection Agency is placing new restrictions on coal power plants that could cost up to $2000 for an average household. According to Forbes, these restrictions will not actually be implemented until 2015, but energy providers are being pressured to make the transition as quickly as possible. The angle Fox took on the story was that this could end up costing people more to put up Christmas decorations next year.

RELATED: The Beagle Has Landed: Ed Schultz Introduces The World To Rex The ‘Republican-Hating’ Dog

The other story Schultz couldn’t believe was being addressed by “Steve Douchey” (let’s assume that was deliberate) and crew was a guide to what could lead to a lawsuit during the holiday season. Based on what Schultz showed, there was nothing particularly egregious about the segment. Legal analyst Peter Johnson came on to tell viewers to be careful of tree fires and egg nog, and to make sure you have the right insurance should the worst happen. There’s also a brief clip of Steve Doocy in black & white shouting, “Yeah, Fox News! Merry Christmas” for no discernable reason.

Schultz’ biggest peeve during the segment was that Fox & Friends normally loves Christmas and talking about the War on Christmas™, but their Christmas coverage has been “exploiting” the holiday. Here’s where Schultz is really stretching. The EPA regulations are pretty newsworthy and are bound to spur some human interest. Plus, there’s really nothing wrong with giving viewers advice on how to avoid getting sued. I’ve never been sued, but from what I understand, it’s something you would want to avoid.