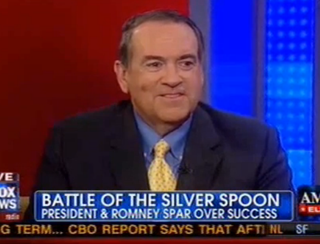 President Barack Obama‘s comment that he happened to not be “born with a silver spoon in my mouth,” has ignited something of a side debate about whether Mitt Romney is too wealthy to understand the average American and, therefore, govern properly. Not many Republicans are buying it, and on this morning’s Fox & Friends, Mike Huckabee— who also notes he was born without the proverbial silver spoon– emphasized how much Americans don’t care about whether other people succeed, “they want the American dream for themselves.”

Host Clayton Morris, who dubbed the back and forth about Romney’s wealth the “War on Flatware” in jest, asked Huckabee if he considered there was possible impact from the fact that “we’re hearing this from the White House, this not being born with a silver spoon.” Huckabee did not see it as “that big a deal,” since it was part of the President’s narrative and part of his, too. “Neither was I born with a silver spoon in my mouth, I can’t help that.” That said, Huckabee thought Romney “has handled it very well.” Morris wondered whether this would be the “larger debate we’re going to see heading into the election,” which Huckabee hoped for the President’s sake it would not be.

“I think it’s a losing argument,” Huckabee noted. “If that’s the best shot Obama’s got, he needs to reload and find something else.” He argued that the problem with the argument is that “Americans don’t care what Mitt Romney has; they care what they have. They care that their own jobs are disappearing, not that Mitt Romney had a good one.” Since Americans “want the American dream for themselves,” they are not too concerned about others who happened to live it.

As for the process Romney must now undergo to find a vice presidential running mate, Huckabee had faith that Romney would go through an “exhaustive process… not made on some press clips” to find the right person. He also joked, as a former Lieutenant Governor, that it is a bit of a thankless job– being second in command “is like being a spare tire.”