Is Keith Olbermann Losing it? 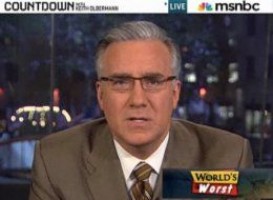 Just hours after Jon Stewart‘s sharply observant takedown of Keith Olbermann‘s Special Comment segments, the Countdown host launched into a diatribe that made Stewart’s segment look like a love letter. In railing against yesterday’s hotly debated Supreme Court decision, he effectively said it was worse than slavery, and compared Floyd Abrams, who is Jewish, to a Nazi.

Is Keith losing it?

While the wisdom of the court’s decision is the subject of heated debate, the ramifications are not. Earlier in the show, Howard Fineman said that he didn’t think they could be overstated. He was wrong. Here’s Keith’s Special Comment: (Transcript here)

His assertion that this decision was worse than Dred Scott doesn’t just border on offensive, it crosses it and buys a condo. Comparing renowned First Amendment lawyer Floyd Abrams to Nazi Vidkun Quisling is vile on its face, so far beyond the pale that the pale needs a telescope to see it, but it also reveals a key symptom of Olbermann’s creeping mania. This was personal.

Floyd Abrams, as is widely known, is the father of this site’s founder, Dan Abrams. He and Olbermann were colleagues for years at MSNBC, and Olbermann provided the lead-in for “Verdict with Dan Abrams.” I don’t know anything about their relationship, but I know that such a personal connection to a story would warrant either extremely sensitive handling (strike one), disclosure of said connection (strike two), or both (the whiff!).

One of the reasons so many people glommed onto Countdown during the Bush administration was the feeling that Keith was speaking for them while others were silent, and the scores being settled were on their behalf.

More and more, though, Olbermann has muddied often legitimate criticism with his own personal ax-grinding. He routinely peppers his indictments of the deserving Rush Limbaugh, for example, with the observation that Rush couldn’t hack it at ESPN. Love him or hate him, people’s opinions of Limbaugh aren’t shaped by the degree to which he did or didn’t succeed at being Keith Olbermann.

Particularly petty was his takedown of the LA Times’ Andrew Malcolm. Responding to a gentle quip about a typo in the paper’s TV listings, Olbermann calls Malcolm a hack and gloats at the possibility that the LA Times might go under. The reaction was comically disproportionate and bitingly personal.

Then, there was his ongoing barrage at Carrie Prejean, not for supporting a ban on gay marriage, but because she has fake boobs and masturbates on camera. There was a Nazi reference in there, too, but he didn’t make it, he just laughed at it.

More recently, though, there has also been a feverish, paranoid quality to some of Olbermann’s reporting. A Kos diarist pointed out that during Keith’s Haiti coverage, he returned over and over to the theme of impending civil chaos, even though all indications are that Haitians have been relative models of restraint in this regard. Olbermann makes some fair points in his own defense, but I watched that coverage for days. Each night, Keith wondered if this would be the night that Haiti descended into chaos.

Stranger than that was his handling of a near-afterthought by Countdown contributor Richard Wolffe in the wake of the attempted bombing of Flight 253. In describing what lines of inquiry the White House would follow in determining the source of the breakdown that allowed the Underwear Bomber to get on that plane, Wolfe used the phrase “cock-up or conspiracy,” but he went on to explain that he was referring more to the possibility that inter-agency rivalry had displaced higher priorities. He gave no indication that this was anything more than a spitball.

Olbermann then began to hype the “revelation” as a breaking development that there may have been a conspiracy to undermine the President, at the cost of American lives. Over the next few days, Wolffe tried to talk Keith down, and explain what he really meant.

This has been a tough year for liberals, who watched as the media’s bias toward laziness allowed dishonest opponents of healthcare reform to take over the debate. At the same time, Democrats in Congress and the White House have fumbled badly along the way, culminating in the loss of their 60-seat Senate majority this week. Having fought alone in the wilderness of the Bush years, it must be frustrating for Olbermann to come to grips with the fact that so much promise has been wasted.

But it is for precisely this reason that he needs to take a deep breath and re-calibrate his sights on the big picture. Just as it did under George W. Bush, America needs credible liberal voices, and Rachel Maddow can’t do it all alone. By engaging in such grand-standing hyperbole and personal score-settling, Keith Olbermann is giving people an excuse to ignore him. I would remind him that the measure of his success has never been in ratings, but in influence.

Olbermann’s defenders will rightly point out that in a media landscape which includes the unhinged likes of Glenn Beck and Rush Limbaugh, Keith is miles away from the bottom of that barrel. As a longtime fan of Keith’s, I would remind them that a great deal of his appeal has always been that he takes pride in being better than them, not better at being them.