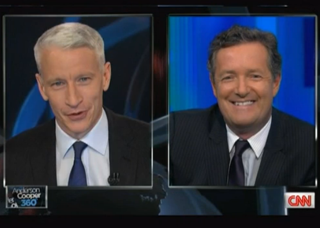 Piers Morgan‘s show hasn’t even aired yet, and he is already guaranteed to win the most interest tonight, as former Delaware Senate candidate Christine O’Donnell walked out on his program, offended that she was asked a question on her views on same-sex marriage. Morgan visited Anderson Cooper to give a bit on insight on the moment, which he found “a bit extraordinary” and argued it made O’Donnell look “like she has something to hide.

Cooper gave Morgan the floor to explain what he had felt as O’Donnell walked out, and he admitted it was “a bit extraordinary”– “I thought I was being my normal, chivalrous British self, and then she took huge umbrage, declared I was being very rude, and walked out.” He admitted he may have been “a little bit cheeky, maybe, but not rude” and didn’t believe the audience would agree with her.

What’s more, “it looks like she has something to hide” that she wouldn’t answer a question on something she had said in the past– “her views may be so extreme and contentious that it may cause her political damage,” Morgan argued, not quite specifying whether a layperson like O’Donnell could actually accrue political damage anymore. On Cooper’s part, he added he “found it fascinating that she had some person stand in front of the camera,” as if it would do her some good. While the clip was released beforehand, CNN will be airing the full interview (or at least what Morgan got before he lost his guest) tonight at 9PM.

The video via CNN below: