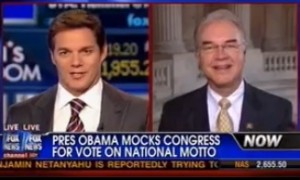 Yesterday, President Obama mocked Congress for wasting time on a resolution to reaffirm “In God We Trust” as our national motto instead of working on passing jobs legislation. Rep. Tom Price (R-GA) appeared on Fox News this morning to defend the Republican-controlled House by pointing out that the resolution didn’t take any time at all. However, he didn’t exactly help his overall thesis that they’re not playing politics when he basically admitted that, yeah, they only did the darn thing to stick it to Obama.

Fox News’ Bill Hemmer repeatedly asked Price the reasoning for spending whatever time it took on the resolution and, four separate times in the three minute clip, Price cheerfully admitted it was only to “remind the president what the motto of our great country is.” At one point, Hemmer even gave him a potential out, asking if he was worried the country faced “a crisis of identity” with regards to its religious heritage. Nope, Price replied. Just “reminding” Obama.

“While President Obama’s larger point is sure to resonate with many unemployed, he presented his argument in a classic straw-man style, by saying ‘If Congress tells you that they don’t have time, they’ve got time to do it,’ before citing the trivial congressional resolutions. Congressional opponents of the administration’s jobs bill aren’t not passing it because they are otherwise occupied, as Obama appears to suggest, they are opposing it, ostensibly, because they it see as a flawed bill.”

Why didn’t Price focus on something like that? Instead, he played right into the image that Obama is trying to depict by appearing petty and obstinate.

This seems to be an endemic problem in the Republican Party these days. When they have what seems to be an easy victory, they just shoot themselves in the foot. It’s as if they’re reading from the mid-2000s Democrat play book. Seriously, this is just a much smaller example from the party that, when going up against a hugely divisive President facing horrible unemployment, decides to forego making themselves sound serious and, instead, spend two weeks talking about Donald Trump.

There is just not good strategy going on over there.