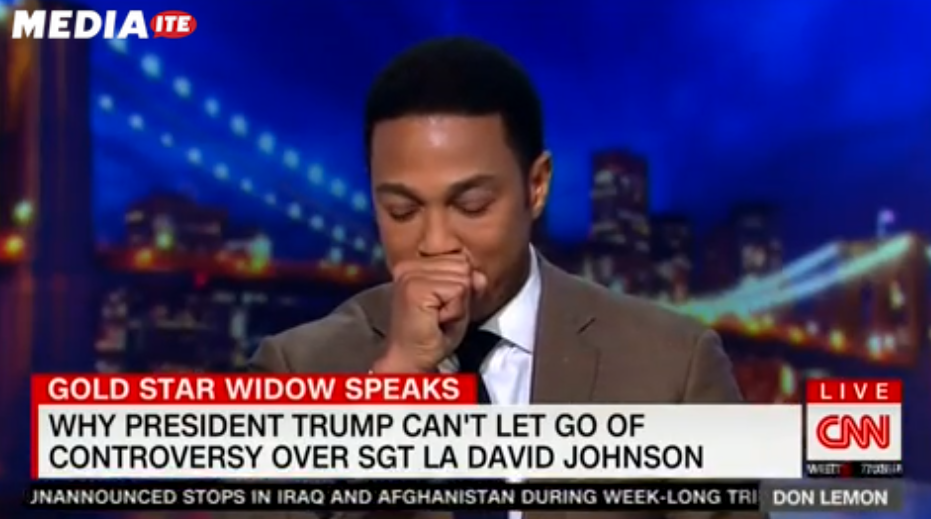 Just hours after CNN self-importantly and sanctimoniously claimed they’d be the network of “Facts First” one of the 3rd place news outlet’s anchors took to the air and read a letter he’d written to President Donald Trump and Gold Star Widow Myeshia Johnson. He then broke down in tears overcome by the emotional power of his own words.

Facts first. An apple is an apple and will never be a banana.

Lemon’s letter/monologue began with FACTS designed to puff himself and his broadcast up a bit, “I interviewed you multiple times. You’ve introduced me to your family.”   The preamble also offered FACTS that served the purpose to paint Lemon as a victim of Trump’s unwarranted abuse, “You’ve also criticized me publicly, both in front of cameras and on Twitter, calling me ‘hateful’, ‘dumb’, a ‘lightweight.’”

FACTS… make no doubt about it.  These are all FACTS and Lemon presented those FACTS first.  But then, several seconds later, Lemon ventured into the realm of speculation and opinion as the entire premise of his monologue:

I feel compelled to do that after this latest controversy with the widow of Sgt. La David Johnson. Your tweet this morning essentially called her a liar.

Essentially, is a banana.

I’m guessing “Facts First” is meant to convey to viewers that CNN represents the grown-ups in the room. The real journalists. The adults who will not be caught up in the partisan hysteria of the times and will dispassionately deliver the news, the FACTS, to you the viewer.

This is the news network that recently fired 3 reporters for a story that had to be retracted for its lack of provable FACTS.

This is the news network that for months repeated the Obama/Clinton talking point that “17 intelligence agencies” had verified that Russia hacked John Podesta’s emails when in truth it was 3, maybe 4.

This is the news network that continues to bring James Clapper on the air as an expert guest even though he has lied under oath before the Senate and either lied or is completely befuddled regarding wire taps on Trump campaign officials.

This is the news network that told us James Comey would dispute Trump’s version of conversations the two had had  just hours before Comey actually confirmed Trump’s account under oath. They reversed that story, when the FACTS came out.

This is the network that showed a picture of a rifle with a grenade launcher while explaining the FACTS about bump stocks to their gullible audience.

But that is all in the past for CNN. Now they are “Facts First.” And that’s what we saw last night with Don Lemon’s monologue. Well, it’s essentially what we saw.

But Lemon wasn’t done.  After steering his monologue to Mrs. Johnson and praising the heroism of her late husband, Don Lemon cried. On the air. After reading and reflecting on his own brilliant prose, he wept. And he had to take a moment before he could continue.