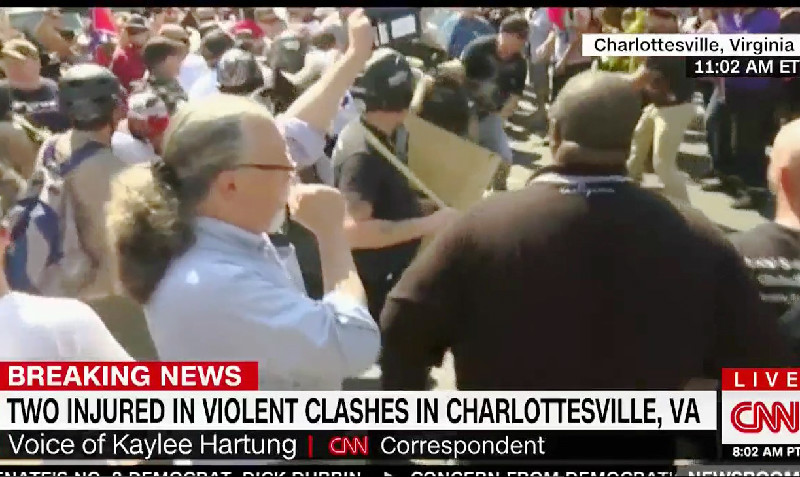 It has now been a week since the violence took place in Charlottesville, VA. Our country’s wounds are still sore from what happened and what has happened since and the only way for we as a people to heal is to confront reality head-on. But the problem is how do you define reality? That question is tough to answer, but if you think the media gives an accurate portrayal of reality, think again.

The way we consume news helps us form our own perception of reality and it’s important to know what we are consuming just as you would with food. Some is good, some is bad, some is sensational, some is organic, and some could be fake and artificial.

Throughout the course of the week, I’ve come across three double standards that have been on display by the mainstream media in relation to the coverage of Charlottesville.

1.How The Media Treats The Alt-Right vs Antifa

If you’ve read my column, then you’d know how I disapproved the way President Trump handled his reaction to the violence in Charlottesville. He essentially diluted the wrongdoing of white nationalist James Alex Fields Jr. when he drove his car and killed 32-year-old Heather Heyer and injured 19 others by condemning the “hatred, bigotry and violence on many sides.” While I agree that there is hatred, bigotry, and violence on many sides, there’s a time and a place to talk about it and doing it within hours of what many have called a domestic attack was not one of them.

During the week, Trump was blamed time and time again for what has been determined as emboldenment of white nationalists. The media points to his divisive rhetoric during the election and his policies of his presidency to allege that he’s been letting hate flourish in the country. But most importantly, the media still makes the point to condemn the white supremacists, neo-Nazis, and the KKK members that gathered in Charlottesville.

The problem is the media is much gentler on Antifa when they commit wrongdoing.

Between the riots that took place after Trump’s inauguration or the ones on college campuses like UC Berkeley, it seems the media doesn’t do a whole lot of condemning of those people. When an  avowed supporter of Bernie Sanders tried to assassinate GOP lawmakers, we were told that both sides need to “tone down the rhetoric.”

Perhaps the reason why the media gives little regard to Antifa is because Antifa like the vast majority of the media is anti-Trump, so their wrongdoings are given some slack.

2. The Media Can Only Call White Supremacists “By Its Name” But Not Islamic Extremists

There was a firestorm that surrounded President Trump after he failed to not specifically name the hate groups that assembled in Charlottesville. CNN’s Don Lemon called it a “tragedy.” Fox News’s Eboni Williams called it “cowardly.” CNN’s Ana Navarro said Trump was “unfit to be human.” Roland Martin claimed Trump had “blood on his hands.” MSNBC’s Mika Brzezinski said it was a “low point in American history.” Even the late-night comedians were brutal, with Jimmy Fallon calling it “shameful” and Jimmy Kimmel going even further by saying Trump “needs to go.”

Last week, I wrote a column that compared Trump’s soft rhetoric towards these white supremacists to President Obama‘s soft rhetoric towards Islamic extremists. And my point was that the people who were outraged at Trump for what he didn’t say last weekend weren’t outraged with his predecessor for the past eight years after every terrorist attack that occurred.

3. The Media’s Obsession With Covering Certain Shameful People And Not Others

Since Charlottesville, the worst of the worst America has to offer were given millions of dollars with of free exposure. Former KKK grand wizard David Duke‘s face was plastered everywhere. Vice News made a documentary that went viral that captured the events from last weekend. CNN’s Brooke Baldwin had a Confederate on her show who compared Abraham Lincoln to Adolf Hitler.

But then I was reminded of all the outrage that surrounded Megyn Kelly‘s interview with radio talk show host and conspiracy theorist Alex Jones that aired earlier this summer. There was a big uproar leading up to the interview, that had many people blasting Kelly for “legitimizing” Jones and calls for a boycott. Don Lemon said that he “would rather not give him a platform,” yet his colleague Brooke Baldwin gave a Confederate a platform to compare Lincoln to Hitler.

So why would the media do all they can to marginalize some interview with a kook like Jones but will dedicate endless coverage to a small collection of the country’s racists? Perhaps the answer is twofold.

As awful as Jones is, he is part of the media and one that always counters the narrative established by the mainstream media. Many dismiss him as “fake news,” but he is still an influential figure since he has an audience of millions of people. He doesn’t fit the media’s narrative. Meanwhile, neo-Nazis and the KKK certainly fit the media’s narrative that our country is more racist now because of President Trump, at least that’s what they want us to believe. So they’ll give folks like David Duke all the airtime in the world just to make Trump look bad.

It’s important to get a good grasp on reality and the only way you can do that is if you have a better understanding of all sides of it instead of the one that’s being spoon-fed to you.  Do your research, expose yourself to numerous points of view (such as my own), and draw your own conclusions.

Ed. note – this column has been edited since publishing to more correctly define the attack on GOP congressmen playing baseball earlier this summer.