A Fringe Coalition: When the Left and Right Join Forces to Discredit the Center

A Fringe Coalition: When the Left and Right Join Forces to Discredit the Center 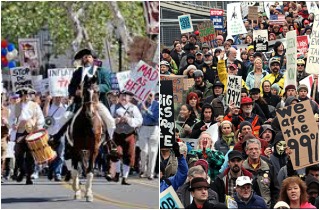 When Americans attempt to visualize the nation’s broad spectrum of political opinion, they often imagine just that — a spectrum. They envision a line with a small, visible segment in the center — where most of the observable action takes place — and two polar extremes which are largely invisible to all but those with the precision instruments required to expose them. The fringes, most suppose, are separated by such a vast distance that they could never meet. But Americans would be better served by substituting the linear spectrum they visualize with a loop. At the far end of that loop, the nation’s far-right and far-left voices often meet and even agree.

This phenomenon was evident during the 16-day government shutdown of October, 2013. While conservative activists and liberal commentators rarely shared the same logic for attacking the centrist Republicans who opposed the shutdown, they often appealed to the same rhetorical excesses while attacking them.

This was a period in which you could scarcely ascertain the difference between the unrestrained rhetoric of conservative radio host Mark Levin and MSNBC personality Joy-Ann Reid. A “moron,” and “a preschool teacher” were some of the insults that both personalities hurled at House Speaker John Boehner (R-OH) during the shutdown, though for distinct reasons.

During the shutdown, both progressive and conservative outlets regularly attacked Speaker Boehner as a “coward.” A Democratic ad which ran against him during the shutdown linked him to a wailing baby throwing a tantrum after he failed to force the defunding of the Affordable Care Act. When the Speaker acquiesced to a deal that ended the shutdown, diehard conservatives attacked him on his Facebook page as a “turncoat” and a “fascist.”

While the more cautious commentators on both sides were careful to note the distinction between the Republicans who favored the shutdown strategy and those that were reluctantly entertaining it, the commentators on the fringes of American political life often did not.

The reopening of the government forced both sides to their corners again for a time but the scandal surrounding the closure of two lanes of the George Washington Bridge by New Jersey Gov. Chris Christie’s aides, allegedly to punish a political adversary, has closed the circle once again.

Today, America’s partisan progressives are jumping at the chance to kneecap Hillary Clinton’s most formidable 2016 challenger. They are joined by unlikely allies on the far-right who view Christie, a moderate, as the greatest threat to the GOP’s chances for retaking the White House.

“Obama set the tone for his staff and the IRS,” wrote RedState editor Erick Erickson. “Christie did the same in New Jersey.”

“This may be the rare time conservatives cheer on MSNBC and other liberal media outlets as they down a (alleged) Republican,” echoed conservative radio host Steve Deace.

Even some usually measured and insightful conservative political commentators have pounced on Christie. Writing in the conservative online opinion journal Ricochet, GOP consultant Rick Wilson suggested that Christie is suffering a fate an “Acela Republican” deserves:

Wilson continues: “He talks about bringing people together, working with the other party, getting things done for everyone, regardless of politics…if only his own backward, hick, red-state, cousin-kissing bumpkin party will see the light.” His attack on Christie is dripping with contempt — not for the man, but for the region of his birth and whose residents he represents. This is a bias he would surely recognize and recoil from if it was coming from a Democrat denouncing the unsophisticated residents of flyover country.

In fact, most of these conservative attacks on Christie would be right at home on MSNBC. Lawrence O’Donnell declared that a nonagenarian woman whose death was initially, and erroneously, linked to the Fort Lee traffic jam would “become the Willie Horton of Chris Christie’s presidential campaign.” Chris Matthews drew applause from the audience of The View when he offered some unsolicited advice to Christie’s fired aides on how they could implicate their former boss in the scandal.

The network’s prime time hosts have, in fact, gone all in (so to speak) in the effort to expose Christie as a vindictive and manipulative “bully,” going so far as to repeatedly broadcast arcane and unsubstantiated theories about Christie’s motives. National Review editor Rich Lowry correctly noted that the various theories posited by MSNBC personalities designed to make Christie a toxic property “failed to meet the most basic evidentiary standard of, you know, marshaling some evidence.”

But those theories satisfy a purpose, one with bipartisan appeal, apparently: The desperate need shared by both the far-right and the far-left to smother the Christie juggernaut in its crib.

Pundits on the cable news networks often lament the lack of bipartisanship that supposedly characterized an idealized version of American history, often while failing to recognize their own roles in an era of hyper-partisan politics. But these pundits could just as easily recognize it in the emerging fringe alliance. Both of America’s political extremes apparently view centrism as an existential threat and are willing, if reluctantly, to ally in order to guarantee that theirs remain the loudest and most influential voices in the room.