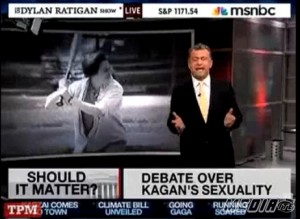 Supreme Court nominee Elena Kagan would probably prefer that her sexual orientation not be the subject of a heated national debate, but since CBS News flung that door open, the genie just won’t go back into the bottle. In fact, the Wall Street Journal’s use of a softball-themed dog whistle seems to have set the genie on fire in a fireworks factory, and an overly-cautious White House is drawing attention to it like a blaring red fire engine. Kagan’s silent defiance is understandable, but she’s now in a position to do a lot of good.

The whole thing started before Kagan was even nominated, with CBS News posting, then retracting, a Ben Domenech blog that presumed Kagan was openly gay. The White House first asked for the retraction behind the scenes, and when they didn’t get it, former Director of Communications Anita Dunn pushed back publicly, calling the report a lie that played to stereotypes about successful single women.

Since then, Dunn has said that Kagan was asked directly about her sexuality during the vetting process, then walked it back. From Jake Tapper:

(Dunn told WaPo) “Administration officials asked Kagan directly about her sexual orientation when she was being vetted for her post as solicitor general, Dunn said in response to a question that she protested was inappropriate. But she insisted that it was not a relevant factor in determining who was named to that job or this one.”

Did the White House ask Kagan about her sexual orientation?

The White House did not offer an immediate response, but Dunn tells me that she may have misspoken or not have been clear when she spoke to Tumulty. She said to be perfectly clear she doesn’t know whether Kagan has ever been asked her sexual orientation by anyone in the administration during the vetting process for the Solicitor General or Supreme Court positions.

That’s not to say that the subject didn’t come up, but this walkback is about as effective at putting this to rest as a Thermos full of Red Bull.

The bottom line is that it’s Kagan’s business, and no one else’s, but when I saw this montage of cablers gabbing about the nexus between softball and sapphic sexuality, it became clear that this could be a great teachable moment:


What we have here is a fiery gumbo of issues that beg for productive discussion, not snickering pop-culture chit-chat: The stereotype about successful single women, the notion that being gay is a negative, and most powerfully, the cruel whispers that often dog young women in athletics.

Now, Kagan did nothing to deserve this glare, but since it has been thrust upon her, she’s in a position to direct it toward a much greater good. It reminds me very strongly of the way then-Senator Barack Obama used the Reverend Wright controversy to break new ground in the national conversation on race relations with his speech on the subject.

When it comes to the use of gayness as a juvenile slur, I’ve found it best to ignore the question of sexuality in favor of pointing out the consequences of the underlying insult. When someone like Human Events‘ infantile Editor-in-Chief Jason Mattera hurls a gay insult at me, for example, he doesn’t harm me. What he does do is promote the use of sexuality as a bullying taunt, which actually kills children. It’s the reason I’ve found the right wing/Fox News smearing of Obama safe schools czar Kevin Jennings so very despicable. His leadership on this bullying issue has made schools safer for all children.

Adults like Elena Kagan and I are much better equipped to handle questions like this than young men and women. While Bill Maher might chuckle at his field hockey joke from last night, to a young woman experiencing these taunts in actual real time, it’s not funny. Trying to find your place in the world is hard enough, gay or not, without this kind of torment.

In Kagan’s case, it is much more than insults, and while the White House has had its hand forced into addressing the rumors, their pushback, without the benefit of even having asked Kagan the question, inadvertently adds to the impression that being called gay is a horrible thing. Does that confer upon Kagan a duty to correct this? No, but I think it would be the right thing to do.

She needn’t go on the record about her personal orientation. She could, instead, hold a press conference in which she delivers some Solomonic remarks on a range of tough subjects. She could point out how the older single woman stereotype, as well as attacks on physical appearance, are used to dismiss the achievements of accomplished women. She could point out that the emergence of this issue, and subsequent focus on it, are symptoms of the emptiness of modern pop journalism. Most importantly, she could state that, regardless of her own sexuality, she is proud of the millions of people in this country for whom sexual orientation and identity are not obstacles to recognition of their shared humanity and equality.

Elena Kagan is well within her rights to remain silent, but her eloquence and likeability are well-suited to this task, and engaging these issues head-on could be enormously rewarding for her, and for us all.