Is Trump’s Pardon of Arpaio a Sign of His Desperation or Boredom?
Opinion

Is Trump’s Pardon of Arpaio a Sign of His Desperation or Boredom? 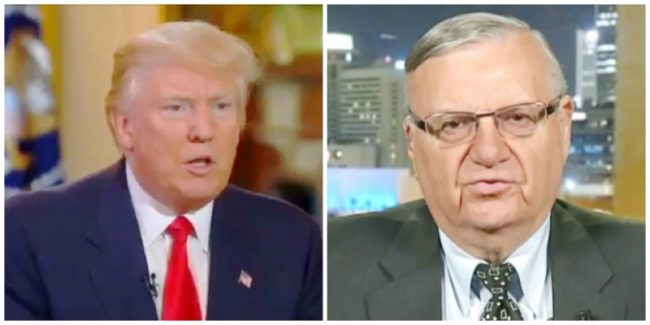 For the most part, Donald Trump is a pretty easy guy to figure out. Once you understand what really motivates him, it is usually fairly simple to put all the pieces of his puzzle together.

However, the one part of calculating the equation behind his decision making which can be problematic is trying to determine the time period during which he expects to see a benefit for any particular action. Assessing whether he is seeking instant gratification, or only semi-instant gain (given his minuscule attention span, those are generally the only two options), can result in a vastly different view of what is really going on in his world.

I have often referred to this mystery as the “checkers vs. chess” conundrum. In other words, is any particular Trump move a sign he is playing out a very simple/direct strategy, or is he thinking several moves ahead? While Trump’s biggest fans (“Cult 45,” as I call them) are convinced that he is a chess master, I have long ago concluded that he is usually just a beginner checkers player who has severe ADHD and more than his share of luck.

Trying to discern what the thinking was behind Trump’s controversial pardon of former Arizona Sheriff Joe Arpaio is a classic example of being forced to choose between these two theories of his thought process. However, in this case, there seems to be more than one perfectly reasonable conclusion.

As for the pardon itself, it was very clearly a bald-faced political maneuver which, as John McCain (representing Arpaio’s state of Arizona) said, was not warranted by the facts and is inconsistent with the rule of law. So, if it were a bad idea, which everyone knew would also be very unpopular to most of the country, why would Trump do it, and why would he choose to do it now?

The “checkers” answer to that question is fairly compelling.

Trump likes Arpaio because he was an early Trump supporter, is pals with his nutty allies Alex Jones, Roger Stone and Matt Drudge, and he helped Trump prove that Barack Obama’s birth certificate, just as they alleged, was fake (that very last part, of course, never really happened). Also, Trump is getting ready for a fight over funding for his promised border wall, he was just in Arizona and praised Arpaio, and he knew his biggest fans would praise him for it, so why not throw them a bone (while also giving his Arizona nemesis, Senator Jeff Flake, fits) late on a Friday night?

This could easily be all there is to the Arpaio pardon. Trump perversely thinks of himself as a King, no longer really cares that he will get ripped by the news media, or that his disapproval ratings are well over 50%, and he figured it would be fun to stick one right into the eye of the “establishment.”

If this is indeed the case, then Trump is simply an arrogant moron who is using the office of the presidency primarily to facilitate his own amusement. The most likely end result of this will not only be the further degradation of the office and the country, but also the destruction of the Republican Party.

The “chess” possibility here, however, while far from certain, is far more intriguing. I have written many times that Trump is much more concerned with feeding his political base than in creating a governing majority and that his cult has been built to withstand, and to even be enhanced by, the worst possible media onslaughts.

There is no doubt that the Arpaio pardon was the definitive “base/cult” move, but in the larger context, it seems like needless overload in this department. He just got universally called a racist in the wake of the Charlottesville fiasco, why would he need to bolster his support among basically the same exact crowd so soon? Why not save the Arpaio pardon for down the road when he might need to remind his cult members how much on the side of the downtrodden white male he really is?

This also comes as Trump is threatening to shut down the government (he won’t) over funding for his Great Wall which he knows will never be built, and speculation that he might finally decide to end the Obama-era DACA program for the children of illegal immigrants. Again, it would seem that pardoning Arpaio was really unnecessary as he is already doing much to service the very same supporters who would be pleased by this move.

All of this makes me wonder if, at least in this case, Trump really is thinking ahead to a time when his base/cult will be truly severely tested. A time when the only weapon he might have to fend off impeachment or a forced resignation is the leverage his cult gives him against anyone in the Republican Party who cares about not being reduced to serving in the minority, or losing their job outright.

While it hasn’t been at the top of the news lately, it is very obvious that special counsel Robert Mueller’s investigation is both widening and progressing. Perhaps Trump knows that some very stormy weather is on the horizon and is doing everything he can to fortify his bunker before it is too late. Or, as some others have already speculated, maybe he is using the Arpaio pardon as a signal to his former aides who are now been targeted by Mueller that he can do the same for them.

I honestly don’t know which answer is correct here. But the fact these questions even need to be asked is a pretty good indication of just how messed up things really are right now, and how they may get even crazier fairly soon.