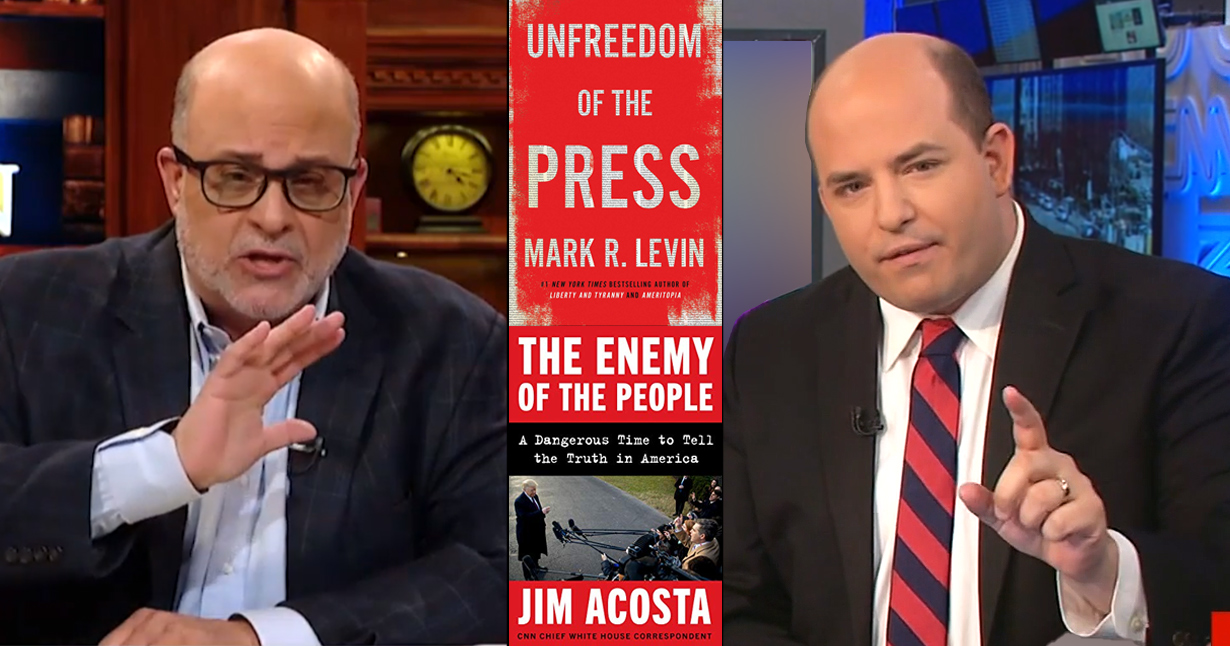 CNN media critic Brian Stelter lamented the success of Fox News Channel everything critic Mark Levin‘s book Unfreedom of the Press – already #1 on Amazon a day before it is released – in his newsletter on Sunday night, and conservative media criticism website Newsbusters pointed it out on Twitter.

That prompted a retweet from Levin and now here we are.

Starting at the beginning, this is the excerpt from Stelter’s newsletter.

Mark Levin’s hate-the-media book is No. 1

Right-wing commentator Mark Levin‘s book “Unfreedom of the Press” comes out Tuesday. Thanks to his numerous plugs on the radio and on Fox, he’s at No. 1 on Amazon’s hardcover and paperback book chart right now, ahead of Howard Stern‘s new book. His overarching message: You can’t trust the press…

The paragraph does the most important thing of any story about a book: it links to the page where you can buy it. Nevertheless, that prompted a mocking tweet from Newsbusters, complete with reaction gif.

“Right-wing commentator Mark Levin’s book “Unfreedom of the Press” comes out Tuesday. Thanks to his numerous plugs on the radio and on Fox, he’s at No. 1 on Amazon’s…book chart right now.” pic.twitter.com/Gklr4NksrI

That, in turn, produced a gif-less quote retweet from Levin, bashing Stelter.

Sadly, CNN’s Brian Stelter is unstable & obsessed, and does a great disservice to press
freedom and the public. He has no professional journalistic standards and is incapable of changing course. He’s contributing to the demise of the media’s credibility. https://t.co/hAvbyUgE73

It’s the media circle of life. From book to newsletter to tweet to retweet to me recapping everything like a douchebag.

The topic of the media and their books has come up even more recently than that between the two of them. Last week Levin was talking about Unfreedom with Fox’s Jesse Watters and blasted the other book about the media coming out soon, CNN reporter Jim Acosta‘s The Enemy of the People: A Dangerous Time to Tell the Truth in America.

That’s the essential point of the book, a critique of the media, its relationship with Democrats, he lays out the premise right there.

Conversely, Stelter has focused relentlessly on Fox’s cozy relationship with the Trump administration, with the best example being this exhaustive summary from last summer. Some of the details have changed since then, and on Reliable Sources they’ve covered new ties and new examples since then, but this gives the basic flavor:

Vastly different perspectives. And the two have gone back and forth on Twitter a lot in the past. A lot. Although so far on Monday, at the time of this post, Stelter hasn’t retweeted or replied to the latest.

I am sure that neither one of them would call it a feud. Neither would see the other as equal enough for it to be a “feud”. But it looks and quacks like a feud. Between the two of them, between the two networks, between their two worldviews as it pertains to media, and quack-cetera.

We didn’t ask either of them for comment for this summary of events. I sort of took the Heisenberg approach — I didn’t want to affect the events by observing them too closely. Or maybe the Prime Directive is more apropos–I didn’t want to change the outcome by my interaction.

The amount of additional material that could be imported into this post is mind-boggling. In every way, the parties involved have views on the press and how it performs its tasks that are incompatible and irreconcilable. And they’re a perfect example of how the right sees the left and the media, and how the media sees the right and themselves.

If there are any more quacks about today’s tweets, we may update this post. But trust that the overall cacophony of the feuding flocks will continue unabated, whether anyone wants to watch or not.

YEP, AN UPDATE:
More things happened. Levin tweeted about a story about the tweets/newsletter.

CNN’s Stelter makes my book’s point and is too dumb to know it!https://t.co/25WiL597lm

And Stelter tweeted about our story.

I didn't "bash" @marklevinshow's book, I reported that it's #1 on Amazon and it's full of hate-the-media rhetoric https://t.co/a2Whp3mjDu

The beat goes on.

AND THEN SOME MORE:

Pretty funny (see link). Even funnier is that neither CNN nor Mediaite could wait until my book’s release to comment. That kinda says it all. Welcome to the modern media. Hang in there boys. It’s less than 24 hours until its release. ?https://t.co/s4f5hjaNyQ