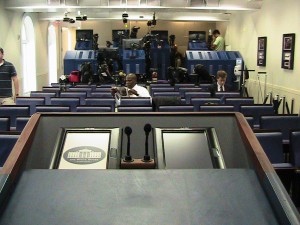 Washington, DC is often referred to as “Hollywood for ugly people,” but in recent years, the town has enjoyed one night of the year when it blossoms into a Hollywood swan: The White House Correspondents Dinner, aka “Nerdprom.” As the dinner’s profile has risen, so has the demand for tickets to see, and be seen, at an event that is ostensibly a celebration of DC’s least glamorous denizens. Even as this year’s Seth Meyers-headlined fete has had to compete with the Royal Wedding, the clamor to get in has reached an all-time zenith.

The WHCD has always been a big deal to political insiders, but it really hit the pop culture radar in 2006 with Stephen Colbert‘s blistering headlining performance. Beginning with the 2008 presidential election, public interest in the spectacle (if not the substance) of politics has turned our boring little beat into the center of the universe, at least for one night. Like the nerdy kid whose mom hires Batman to do his birthday party, suddenly everyone wants to be our friend.

According to a source within the WHCA, the demand for tickets to this year’s dinner was at an all-time high, with 360 requests for tables submitted, out of only 262 available tables. The demand was so high that some dues-paying members of the Association weren’t even able to get a single seat, although the source says these were all organizations that only signed up recently. “We can’t have people joining just so they can go to the dinner.”

The WHCA accepts applications, and checks, for whatever the number of seats requested, then divvies them up according to several factors. WHCA board members get first dibs, followed by those organizations which participate most heavily in pool coverage, and those that travel most frequently with the President. This can lead to some unhappy campers, as World Net Daily‘s 2010 lawsuit illustrates. WND requested three tables to fete correspondent Les Kinsolving, but was only granted two tickets. Kinsolving, the second most senior correspondent, will not be attending this year.

Of those members who do get to attend, many have had to scale back their own guest list to accommodate larger outlets, who can lock up as many as seventeen seats, many for non-press interlopers like Justin Bieber, Alec Baldwin, and Bristol Palin. While not the most egalitarian approach, such star wattage helps to make the dinner a buzzworthy affair.

For the workhorses who actually cover the White House, the dinner is something of a mixed bag. CBS radio’s Mark Knoller, a Twitter superstar and leading contender for Press Corps “Dean,” relishes the “chance to see old friends and colleagues,” but in addition to the perpetual nightmare of parking in DC, doesn’t care for “the Golden Globes aspect of the dinner. Unless I get Anne Hathaway to be my guest.”

Mother Jones‘ David Corn isn’t a big fan of the overcrowding, or the strained availability of tickets. Asked why he thinks the dinner is such a hot ticket for celebs, Corn theorizes, “Their lives are empty and meaningless? Or could it be the food?”

Perhaps the toughest cookie in the press corps, AURN’s April Ryan, looks forward to the dinner as a welcome reward for hard work. “It is really like a break after a continual study for what seems like a masters degree that never comes. We have to know every topic daily in a matter of minutes, and then pepper the President and/or administration officials for answers that matter to the public.”

For Ryan, the worst thing about the dinner is the “curse” of a glamorous night. “About 5 thousand people are packed into very small rooms for pre receptions trying to make it down the hall without getting your gown stepped on, or stepping on another fabulous creation.”

She doesn’t see a problem with the megawatt guest list, either. “Since I have been covering the White House for the past 14 years, it has alway been a major deal for politics and Hollywood to meet,” she says. “They follow us and we follow them. It seems like the natural order of things to me.”

Ryan doesn’t agree with critics of the dinner’s glitzier aspects, and notes the positive effects of such luminaries on the coverage of the dinner. “People come me out in large groups and wait in the Hotel lobby to see their favorite celebrity, and all the entertainment cameras are there, and the event is being aired on C-SPAN.  And, has anyone stopped to think some of the celebrities may actually have a connection with some Correspondents?”

Progressive radio host Bill Press, part of the “Professional Left” clique (along with Corn) in the briefing room, sees the dinner as a unique opportunity. “Last year, I met Joy Behar. I’m a huge fan. Since then, I’ve been on her show several times, and she’s been on mine. Great networking!”

Not every celeb sighting is a joy, though. Press’least favorite part of the event is “running into total jerks who don’t belong there and should never have been invited, like Donald Trump. I also don’t like seeing people I otherwise admire make whores out of themselves by inviting jerks like Donald Trump.”

Inevitably, events like these lead to criticisms that the press corps is “too cozy” with the administration it covers. Knoller allows that “In some cases, the criticism is right on target,” but others, like Corn, scoff at the idea.

“It’s very difficult to be cozy in a room full of 3000 people,” Corn begins. “In other words, I don’t think the media swallowed the Bush administration’s bogus case for war in Iraq because once a year reporters shared an evening in a cavernous ballroom with a handful of government officials who misrepresented intelligence to push a phony argument for the invasion.”

Huffington Post’s Jon Ward, late of The Daily Caller and The Daily, thinks the criticism is just overblown. “I like parties,” he says. “Parties are good. People who get all tense about parties maybe need to go to more of them.”

Press sees the criticism as sour grapes. “Those who criticize dinner as administration getting too cozy with media are those who couldn’t score a ticket,” Press says, adding, “Frankly, I’d rather see more people from administration and fewer from soap operas.”

If anything, the dinner is a demonstration of how much each White House needs the press corps, not the other way around.

The ever-increasing celebrity glare is both a blessing and a curse, raising the dinner’s profile, and with it, that of the work done by the press corps, but also diluting the journo-centric vibe of the event. Hopefully, a beneficial balance will be struck, but at the very least, we hope that folks remember this event the next time someone tries to suggest that we ain’t got no reason to live. No ticket for you!