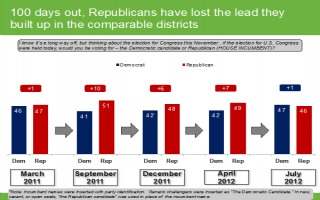 The Democratic polling firm Greenberg Quinlan Rosner, surveying several battleground House districts ahead of the 2012 election for Democracy Corps., finds that a narrow lead for Republican candidates has evaporated and the electorate in swing districts has warmed significantly to Democrats. They found an 8 point swing from Republican to Democratic candidates with less than 100 days to go before the votes are cast.

In September of 2011, GQR measured a 10 point lead for GOP candidates as fallout from the United States’ credit score downgrade by Standard & Poor’s fell around the shoulders of President Barack Obama and his party. By April of 2012, that lead had shrank to just 7 points. Today, GQR finds Democrats have rebounded and now enjoy a 1 point lead over Republicans in vulnerable GOP-held districts. 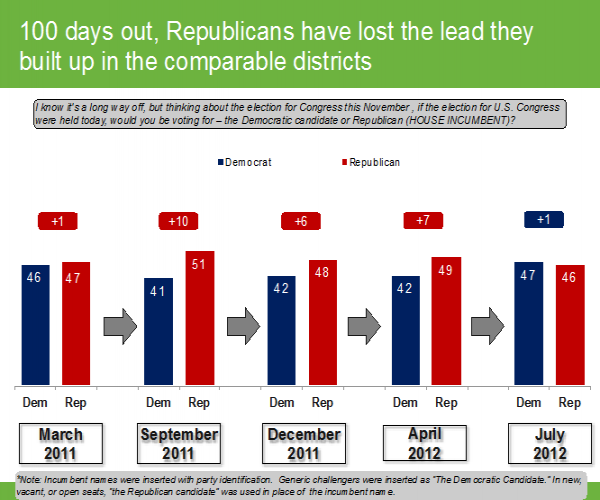 The poll notes that the state of the electorate’s dissatisfaction with their House Representatives looks similar to 2008 when Democrats added 21 new Representatives. Those gains augmented the party’s 2006 gains when the Democrats retook the House and Senate from Republicans.

In 2006, 2008, and 2010, incumbents were brought down, at least in part, by overall negativity toward the parties they represented. If the pattern holds true, on this measure, too, these incumbents are in trouble. The Republican Party’s thermometer scale is now identical to where it was in 2006 and 2008, when the party’s image reached its nadir.

However, GQR is quick to note that they do not foresee a wave election and the trends are too volatile to make a definitive prediction as to how incumbent Republicans in swing districts will fare. They make it clear, though, that these vulnerable Republicans could face a backlash from their voters who narrowly disfavor Republican arguments on budget reform forwarded by Rep. Paul Ryan (R-WI), health care reform legislation and increasing the taxes on wealthy Americans.