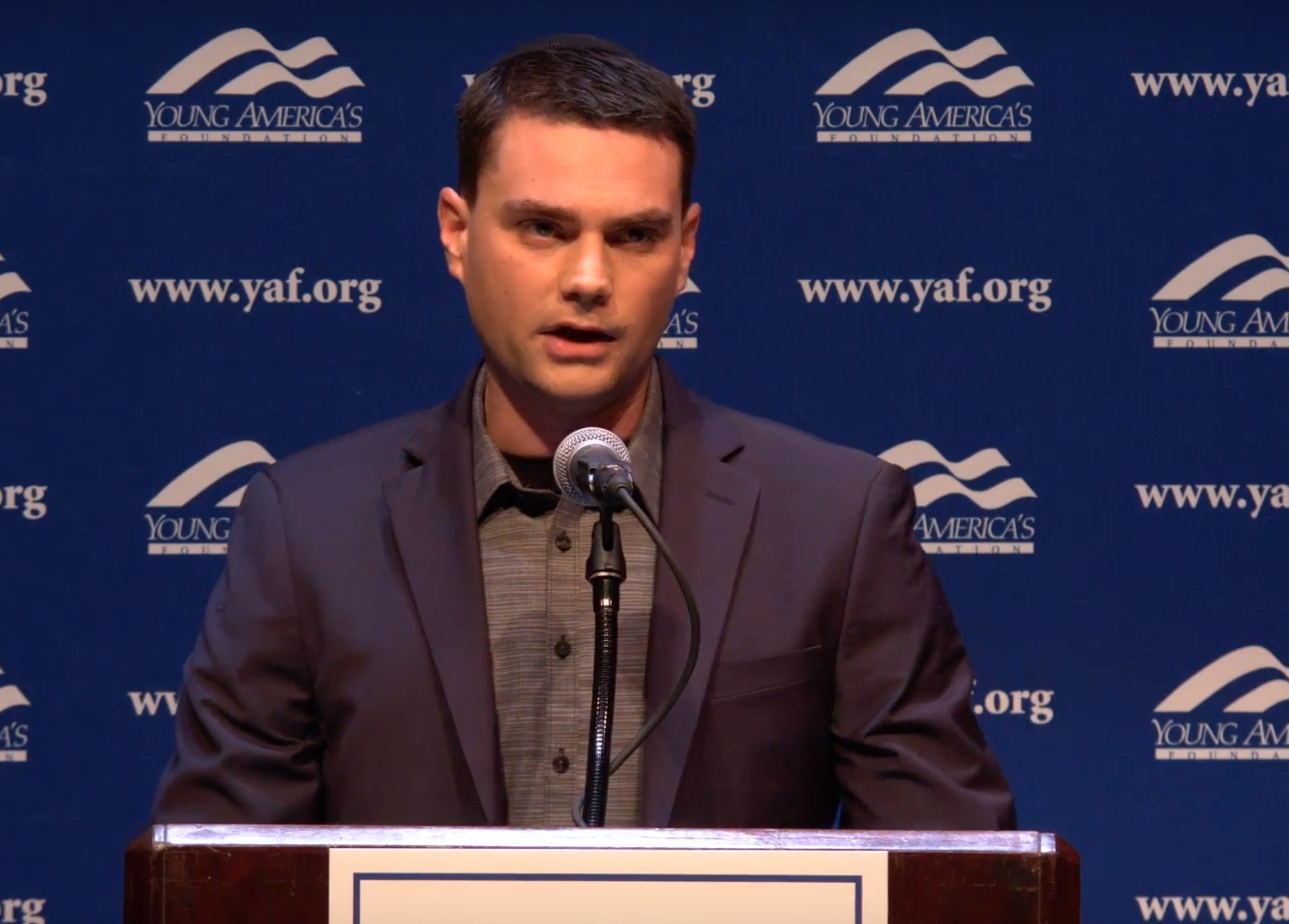 On Thursday night, conservative Ben Shapiro spoke at UC Berkeley and gave a speech appropriately titled “Say No To Campus Thuggery.” In the speech, Shapiro talked about the left’s overreaction leading up to his scheduled appearance and made the argument that the grievances the left makes regarding identity politics are out of laziness and not actual victimhood.

There was a lot of drama (and, frankly, melodrama) that took place before Shapiro gave his speech. First, UC Berkeley blocked Shapiro from speaking altogether. Then they reversed their decision, but decided to charge Young America’s Foundation (YAF), the organization hosting the event, a $15,ooo security fee. Then the university cut Shapiro’s crowd size roughly in half due to “safety concerns” even though he could have easily packed the auditorium. Leading up to the event, the university offered counseling to students and staff who were troubled by the mere fact that Shapiro would be speaking on their campus. And on the day of the event, classes were canceled, graffitied chalk was all over the sidewalk in protest, and businesses closed up shop in fear that riots would break out like they did when Milo Yiannopoulos attempted to speak on campus earlier this year. There was even a banner put up that read “We Say No To Your White Supremacist Bullsh*t.” And by the end of the night, nine arrests were made and roughly $600,000 was spent on security because of the fear that Antifa would freak out about the presence of a 33-year-old Orthodox Jew. And fortunately, no riots broke out due to high police presence.

To those who don’t know who Ben Shapiro is, he’s frankly not worth all the controversy he’s been getting. A graduate from UCLA and Harvard Law School who was smart enough to finish high school at 16, Shapiro is the founder and editor-in-chief of The Daily Wire and his podcast The Ben Shapiro Show is one currently of the most popular in the country, certainly among conservatives. He is also a best-selling author and has made numerous appearances on cable news over the years.

If you listen to what he says on a daily basis, whether it’s through his podcast, his website, or his active Twitter account, then you’d know he is in no way part of the alt-right as his detractors claim he is. His positions are overall mainstream conservative. He’s for smaller government, fiscal responsibility, he’s pro-life, and according to his Q&A last night is a self-admitted libertarian on things like immigration and marijuana legalization. You may not agree with his positions, but he is far from being considered “fringe.”

Despite all of that, UC Berkeley isn’t the only university that Shapiro has had conflicts with. Aside from sparking protests on other campuses, he was also banned from DePaul University as well as California State University Los Angeles. He was even threatened by DePaul University to be arrested for attempting to defy their ban. Again, it’s worth reiterating that Shapiro himself isn’t a threat to these campuses; it’s the threat posed by its students who simply can’t handle him being on their campus.

It’s quite remarkable how much outrage Shapiro sparks among the fringe left, especially in comparison to provocative personalities like Yiannopoulous and Ann Coulter, who was also prevented from speaking at UC Berkeley earlier this year. Unlike Yiannopoulous and Coulter, Shapiro never supported Donald Trump during the election, and he’s been very critical of him during his presidency. In 2016, he left his position as editor-at-large at Breitbart News over the site’s treatment of its then-reporter Michelle Fields after her dustup with Trump’s then-campaign manager Corey Lewandowski. There aren’t many people in politics or in the media who are as principled as Shapiro and yet, despite his outspokenness against the Trump administration, he is still called a “fascist” and a “white supremacist” by many on college campuses.

The question that still needs to be answered is the following: Why would someone so non-controversial like Ben Shapiro spark so much controversy among the far left anyway?

The answer is simple: it’s because of the far left’s inability to have civil discourse with those they don’t agree with.

In the current political climate, there is a bipartisan problem with folks on the left and on the right who prefer echo chambers and ideological bubbles than to listen to opposing views and that has only divided the country. That being said, the right doesn’t attempt to suppress what the left has to say, especially in violent manners, the way the left does. Sure, people on the right called for the firings of Kathy Griffin at CNN and more recently Jemele Hill at ESPN just as the left constantly calls for the firing of conservatives like Fox News’ Sean Hannity. But what separates the outrage from the left and the right is when someone on the right is given a platform on a left-leaning outlet like on television or at a university. Bill Maher received backlash when he invited Yiannopoulous onto his show. Megyn Kelly received backlash for interviewing far-right radio talk show host and conspiracy theorist Alex Jones for her show. And it’s only worse on college campuses, where people like former Secretary of State Condoleezza Rice, conservative icon Charles Murray, activist Ayaan Hirsi Ali, and retired Gen. David Petraeus are invited to speak but are given hostile treatment by snowflakes within the student body. Even someone as liberal as Bill Maher was faced with opposition for his political incorrectness. And we can’t forget the violence that broke out when then-candidate Trump attempted to hold a rally at University of Illinois in Chicago.

That’s not to say everyone on the left has this issue. They don’t. In fact, there were several left-leaning students who attended Shapiro’s speech and debated him on things like abortion and climate change. However, those on the left who don’t have a problem with Shapiro speaking don’t do enough to tame these knee-jerk overreactions that are trying to prevent him from speaking. Aside from a handful of individuals like Maher and Harvard Law professor Alan Dershowitz, much of the centrist left has remained silent on this ongoing dilemma.

Going back to Shapiro, there is truly nothing objectionable about him unless you object to his political views, which you are more than allowed to in a civil manner. He may be blunt and often times brutally honest, but isn’t a provocateur and he doesn’t incite violence. The only weapon he carries with him is his intelligence. As he often says, “facts don’t care about your feelings.”

The problem many college students––and to some extent college administrators––have with Shapiro isn’t just his conservative ideology. It’s also the fact that he’s influential. He is a brilliant debater and Antifa fears he can persuade the undecided to “join the dark side,” as they see it. Shapiro is huge among conservative and moderate millennials, among Trump supporters and #NeverTrump Republicans alike. Not attending his speech wasn’t enough. They see Shapiro as a threat and they’re willing to attempt to shut him down. Fortunately, Berkeley Police had a heavy presence last night armed with pepper spray and enforcing a tough policy on Antifa’s black masks, an accessory which has previously encouraged them to riot.

Alan Dershowitz, a liberal and staunch supporter of free speech, called last night a “battle” for the First Amendment. And thanks to strong police presence, Shapiro got to speak and the First Amendment won, but Dershowitz warned that he or anyone could be next, which he’s absolutely right about. This wasn’t some Nazi or white supremacist that these students were seeking counseling over… it was an Orthodox Jew whose politics they claim are fascist and racist. If you don’t follow their liberal or even socialist ideology, you’re seen as some deplorable bigot. You’d have to be a complete moron to call Shapiro, who was the #1 journalistic target of anti-Semitism in 2016, a “white supremacist.”

The funniest part about the outrage that target these right-leaning speakers is that they always backfire. The intention of these protests is to silence individuals like Yiannopoulous, Coulter, or Shapiro, but in the end they increase their profile and make them more famous. Had they just give their scheduled speeches without any interruption, no headlines would be made and they wouldn’t own the spotlight.

There are definitely issues with political discourse on both sides, but there’s no question that the far left has a bigger problem with anyone interfering with their safe space than the far right does. And all the drama that surrounded this speech from Ben Shapiro proves it.