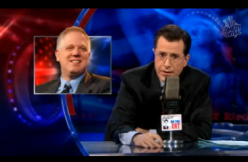 Is anyone in the media not talking about Glenn Beck? It’s clear we here at Mediaite certainly spend a lot of time doing so, but it would appear the rest of the world is catching up. Are they ever. Just take my morning media consumption as an example.

First, Jon Stewart’s much-talked about “epic” parody of Beck on his show last night, which I actually didn’t find that funny, primarily because, as I’ve said before, Beck is really the only person who can do justice to Beck’s unpredictable theater/buffoonery. But I digress. This was followed (in real life, also) by Stephen Colbert’s utterly terrific and hysterical takedown of Beck’s recent, controversial advice to churchgoers (video below). When was the last time anyone warranted a Comedy Central double-hitter, as it were?

Then I came across a random Peggy Noonan reference to Beck in her column this week (she’s long thought him insane). Then there’s Matea Gold’s feature on Bill O’Reilly in this week-end’s LA Times, much of which pivots on O’Reilly in relation to Beck. Meanwhile, I caught Gail Collins on Brian Lehrer‘s WNYC talk show, during which Lehrer made reference to Beck in terms of health care reform voters.

The topper, however, has to be this article, which was chatted to me earlier, about how Glenn Beck is the Lady Gaga of cable news. Admittedly, I did remark to a colleague a few days ago how awesome it would have been if Gaga’s telephone hairdo had been replaced with the Mao phone!

So! What’s the conclusion here beyond the fact Glenn Beck is certainly very zeitgeisty? I wrote back in January that is was starting to look like Beck was being taken seriously by the mainstream media. And I think that’s probably true to some extent — ratings talk. But I also suspect Beck has two viewerships: the people who watch him and take what he says to heart (and although that generates great ratings, it’s still a relatively small slice of the population…about 3 million on average), and the media “elites,” who I am starting to suspect are secretly a bit in love with him.

I use the word love loosely (obviously) but there’s definitely an emerging general recognition on the part of the media that he is a genius at what he does (we mock because we love!). But also because he is by far the best content provider out there. The fact very few people in the media would admit to agreeing to his views appears to be taking a backseat to the chalkboard/Mao phone phenomenon. Something which became clear during Beck’s interview with Eric Massa one journalist on my twitter feed noted that it would be a good time for burglars to target journalists houses since every one of them was watching the “tickle fight” spectacle. There’s something to that. Beck has captivated the media as much (or more!) than he has the country at large — the 5pm time slot also jibes well with office hours — and I suspect a lot of his recent success, and the increasingly frequent mention of his name in mainstream places may be as much the result of that fascination as it is the result of Beck’s mass appeal.

Video of Colbert’s spot below. In my opinion, so much funnier than Stewart, specifically because he wasn’t trying to be Beck. Also, best line: “Jesus was a trustafarian…you just knew is dad was loaded.”

Related: Your Moment[s] of Glenn