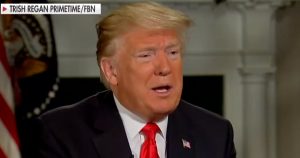 Donald Trump says he can explain why he didn’t join his fellow world leaders this weekend as they commemorated the end of World War I.

During the president’s trip to France, Trump drew considerable backlash for canceling plans to participate at a memorial ceremony from an American military cemetery outside of Paris. White House chief of staff John Kelly attended the ceremony in Trump’s place, and Press Secretary Sarah Huckabee Sanders insists that Trump’s decision came from a combination of bad weather and the disruption of traffic that would’ve happened as Trump moved through the French capital.

In any case, Trump spent his Tuesday morning trashing French President Emmanuel Macron, and now he’s back to attacking the “fake news” coverage of his decision on the cemetery visit.

By the way, when the helicopter couldn’t fly to the first cemetery in France because of almost zero visibility, I suggested driving. Secret Service said NO, too far from airport & big Paris shutdown. Speech next day at American Cemetary in pouring rain! Little reported-Fake News!

It’s true Trump delivered some remarks while he was in Suresnes, but beyond the ceremony skipping abroad, he’s also getting panned for apparently declining a visit to Arlington National Cemetery for Veterans Day.