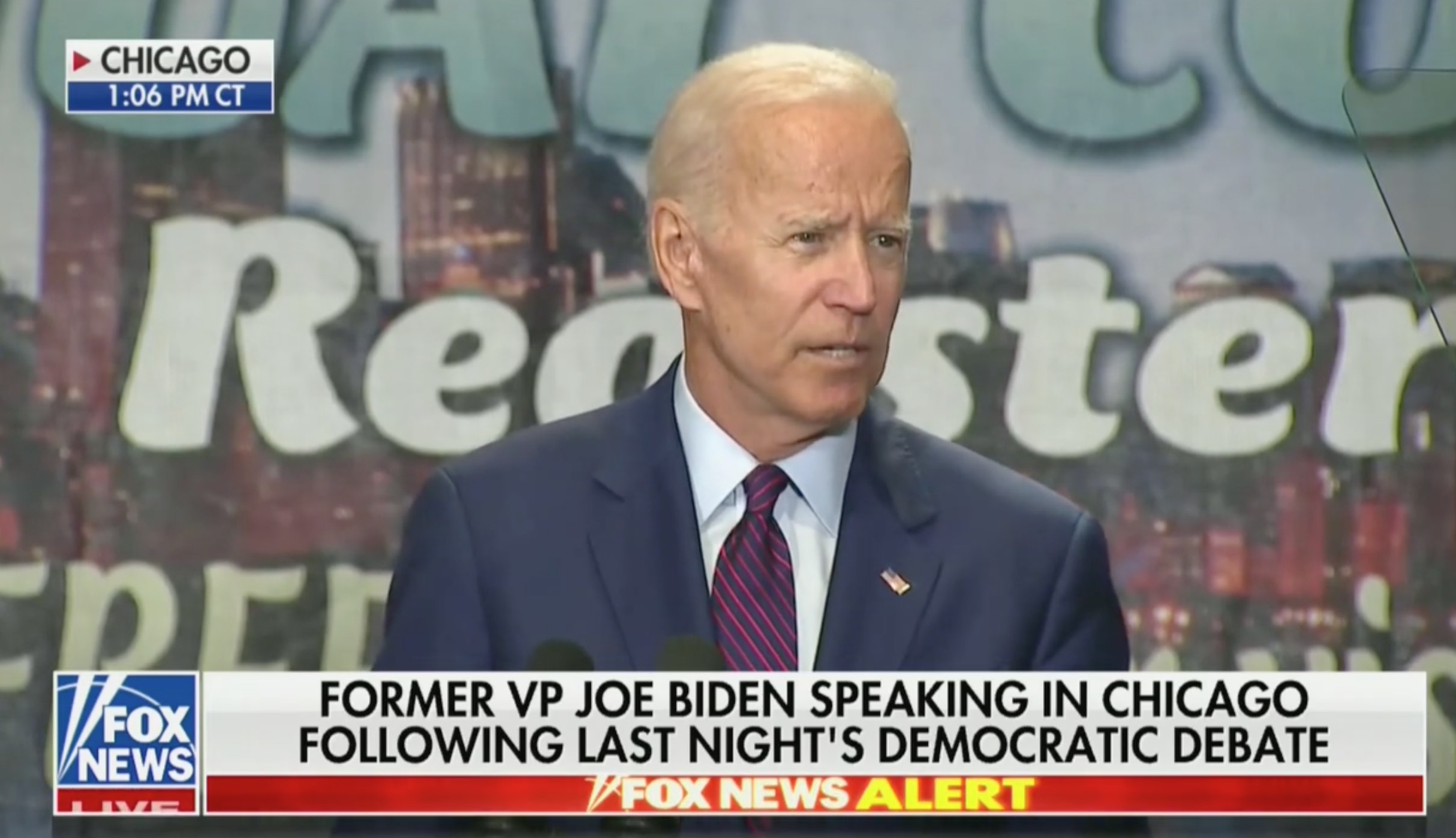 After last week’s second Democratic debate (the only one which actually mattered), MSNBC’s Chris Matthews, always vulnerable to getting way too excited about a narrative that he really likes, asked Kamala Harris whether frontrunner Joe Biden was “finished” after she had knocked him around over Biden’s position on busing in the 1970s. Even Harris seemed stunned by the extraordinarily premature question (she responded, “no”), and post-debate polls still have Biden with a firm grip on first place.

This episode, while maybe the most dramatic thus far, is hardly an outlier when it comes to the way that the liberal elements of the news media have treated Biden and his 2020 candidacy. In short, some of the media personalities who should theoretically be his biggest defenders are instead acting like sharks ready to pounce on him at the first sign of blood.

While there should be no issue with criticizing Biden for being weak in his response to Harris (though I am convinced if he had hit back hard he would have been attacked for being too mean to a black female who was way behind him in the polls), it is the fervor and unanimity with which most of the liberal media has reacted to this episode which is emblematic of a much larger reality. Biden has a lot of vulnerabilities, but his biggest may be that, in a way that is unique for a modern primary candidate, virtually every aspect of the news media is incentivized to at least damage, if not destroy, his candidacy, especially in ways which benefit Harris.

I have written multiple times about why, at least on paper, Biden, of whom I am no fan, is by far the safest path for Democrats if their goal is beat President Donald Trump in 2020. It is clear, however, that most left-leaning media personalities either don’t agree with that sound premise or, more likely, don’t really care nearly as much about winning as they do getting a result which is best for them personally. Much like the inverse of the right-wing media becoming invested in Trump winning the 2016 GOP nomination because he was great for business, the left-wing media is similarly incentivized, either consciously or subconsciously, for Biden to lose because he is bad for bottom-line.

The last thing anyone, liberal or conservative, in the media wants is for Biden to run away with the Democratic nomination. If that were to happen (it will not), it would mean that the news media would be starved for political content from about March of next year until the conventions in the late summer, and then they would be facing a general election between two old white guys with, in comparison to what we have been recently used to, fairly mundane storylines.

Within the left-wing media, Biden offers virtually nothing of value, other than the best chance to beat Trump (which if it happened, would be bad for the business of just about every news media outlet). He is not exciting, he is not historic, he is not particularly “woke,” he is not at all “diverse,” and he is basically Barack Obama’s leftovers.

Meanwhile, Harris and Pete Buttigieg are both young, new, exciting, different, and historic, while Elizabeth Warren and Bernie Sanders have their own liberal media backers because of their super progressive platforms. These are all qualities which liberals seem to value a lot more than winning, even when defeating the opponent is allegedly a matter of national survival, and they provide far more compelling narratives for the media to cover than Biden does.

Making matters worse for Biden, he is also taking regular fire already from both the Trump campaign and the state-run right-wing media, because, after all, they are now essentially the same thing. This is because Trump clearly, and accurately, sees Biden as his biggest threat, and yet liberals seem to not understand this, or think that it is some sort of elaborate fake out. (If it is, why are the same elements praising Harris so much? Hint, it is because they would rather run against her than Biden).

So Biden has no natural media defenders, not force-field protection, and no one in the media (other than maybe a few remaining “Never Trump” conservatives) who has any impetus to see him win the Democratic nomination. For a candidate who, much like John McCain and Hillary Clinton before him, has been used to favorable media treatment by at least some significant elements of the news media, only to see that suddenly evaporate when the media’s motivations changed, this a serious quandary that is likely to come as a shock to Biden.

While it is possible that Biden’s structural advantages are strong enough for him to withstand this media onslaught without any natural weapons with which to fight back, he would have to get exceedingly lucky. He would have to somehow hold on to a large sections of the black vote (probably with Obama coming to an unlikely rescue), while Sanders would have to stay in a solid but harmless second place effectively blocking Harris, Warren, or Buttigieg from being able to get an even shot at Biden until it is too late.

Given that a lot of Democrats seem to have deluded themselves into thinking that beating Trump will be fairly easy and that therefore electability isn’t all that important, this scenario holding for the next nine months seems like a long shot. Consequently, while Matthews’ question to Harris was absurd when he asked it, there is a good chance that eventually he and the rest of the media jackals will get Biden’s corpse for which they so thirst.

After all, when the news media wants a result badly enough, and works in self-interested unison to get it, it almost always happens.