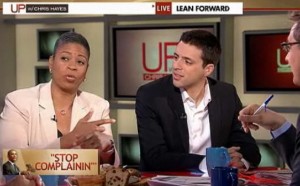 On Sunday morning’s Up with Chris Hayes, the panel discussed the contrast between the way Politico reported President Obama’s speech before the Congressional Black Caucus, and the Associated Press‘ reporting. Unlike Politico, who used the official transcription to pull quotes, the AP’s article reflected the President’s folksier delivery by quotin’ him without the dropped g’s. Karen Hunter called the AP’s treatment racist, John McWhorter disagreed, and Hayes got a laugh by saying, “I can go both ways on this.”

Mark Smith, the AP reporter who wrote the story, commented on the debate exclusively for Mediaite.

Hayes noted, at the top of the segment, that one of his producers had caught the subtle transcription difference, and made the comparison on-screen. As Hayes read the AP version, MSNBC contributor Karen Hunter reacted with a stunned, “Wow.”

Hayes asked John McWhorter, a contributing editor at The New Republic and a linguistics expert, what he made of this “interpretive transcription?”

McWhorter responded that the g-less version “is actually the correct one,” and noted that part of the President’s electoral success had been partly due to the fact “that he can switch into that dialect. Can you imagine somebody that wasn’t him trying to get away with the beautiful ‘Yes We Can’ line?”

Hunter interjected, “But it wasn’t the droppin’ of the g’s. I think it’s inherently racist to do something like that,” and told McWhorter, “and I think that, for you to sit here and defend it, as if it’s cool, when you know what they’re doing, to me is almost offensive.”

McWhorter argued that Black English is becoming the lingua franca of American youth, and that “America, including non-black America, loves that way of speaking.”

He added that President Obama’s use of that “Black English package” makes him sound “genuine” and “warm,” and “I wish that he would talk more that way while he’s on the trail this week trying to push the jobs bill.”

Hunter conceded that the President “knew who his audience was,” but for them to do that in a publication, you know what that is, and I don’t think it’s acceptable on any level. I teach a journalism class, and I tell my students to fix people’s grammar, because you don’t want them to sound ignorant. For them to do that, it’s code, and I don’t like it.”

McWhorter opined that this kind of folksiness doesn’t sound ignorant in the present day. “I don’t think that a little bit of leaving off a G is gonna make people think, ‘Well, apparently, he’s some sort of unlettered thug, after all.'”

Hayes got a laugh when he said, “I can go both ways on this,” then made the point that, journalistically speaking, the AP’s transcription gave a more accurate impression of the flavor of the speech.

The phenomenon of politicians attenuating their speech to a particular audience, or mood, is nothing new, and the particular habit of g-droppin’ has been noted, extensively, of Republicans like Sarah Palin and George W. Bush. However, not all dialectical observations are created equal, as Sen. Harry Reid will tell you, so Hunter’s concern isn’t completely out of left field. It’s a hackneyed cliché among black stand-up comics that even the most erudite black person can suddenly “black it up” when among black friends and family, but such an observation by an outsider can reasonably smack of contempt, and racial marginalization.

This isn’t simple. You have to evaluate these things on their individual, and sometimes subjective, merits. The “veracity” argument that Hayes makes is also used by the likes of Rush Limbaugh as a fig leaf to excuse things like the “Barack the Magic Negro” minstrel show, whose real purpose is to bait with the term “negro,” and to mock the dialect of Rev. Al Sharpton.

On the other hand, as McWhorter points out, if a journalist decides to leave the g’s in there, it can have the effect of whitewashing the President’s speech, in a way that suggests that there’s something wrong with such a manner of speech. In this case, it’s entirely possible that race played a part in the AP’s reporting, as Hunter contends, but that the effect and intent were not sinister, as McWhorter states. The fact that the President was speaking to the CBC probably made those flourishes stand out more, to black and non-black people alike. We were probably all listening for it, just as the President likely factored in his audience when he chose his manner of speech.

But I think McWhorter is correct, that such flourishes make him sound warmer and more genuine. The point I think they all missed is that the President does sound like this in other settings. After almost four years of covering his candidacy and his presidency, I would note, unscientifically, that the President’s choice of g-usage depends more on the context and purpose of his speech than on the racial makeup of the audience. Is the effect more pronounced in front of a black audience? Maybe, but it’s not as if he needs to bring out the little old lady from Airplane! to translate for him.

I’d also be willing to bet, though, that reporting on speeches with those non-black audiences doesn’t contain the apostrophized quotes, and maybe that’s a problem. As a writer, though, I’m inclined to leave it up to the individual reporter to determine how best to reflect events in his or her reporting. Blanket rulings are the enemy of creativity.

I reached out to Mark Smith, the AP reporter who wrote the article in question, and asked him what he thought of the discussion. Here’s his response:(via email)

Normally, I lean toward the clean-it-up school of quote transcribing – for everyone. But in this case, the President appeared to be making such a point of dropping Gs, and doing so in a rhythmic fashion, that for me to insert them would run clearly counter to his meaning. I believe I was respecting his intent in this. Certainly disrespect was the last thing I intended.

As far as that goes, I take a much more ad hoc approach to transcribing. Usually, if there’s an official transcript, I’ll use that, although if I hear something at a White House briefing that doesn’t make it into  the transcript, I will add it.

For interviews, the transcripts are normally done by our interns, and they are remarkably fastidious about leaving in every “um,” “like,” and other repetitive verbal tics. Paring them down is more art than science, as such spaceholders can convey meaning at times, or chronic brain-freeze at others. The same is true of colloquial tics like the dropped g, or words like “gonna,” “lemme,” etc. In this context, unless copy-and-paste laziness got the better of me, I likely would have quoted the President the same way that Smith did.

But I also would not bristle at Karen Hunter, or Chris Hayes, raising questions about it. The type of “code” that Hunter refers to is the kind of thing that creeps up like water coming to a boil, and it’s better to test that water too early than to become a lobster dinner.