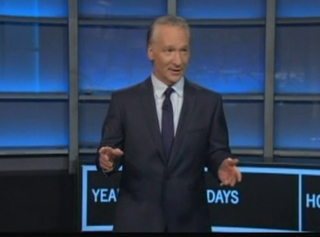 Maher began his monologue with a Rep. Bachmann migraine joke, and a fairly mild one at that. Sometimes, she is incapacitated as much as once a week, reports say, but Maher added– “Even scarier news– sometimes she’s perfectly fine.” He then added a pretend good-natured “I kid the MILFs of the Republican right” before going after Palin for her son Track‘s new child.

“Sarah Palin in the news this week– became a grandmother again, or for the first time, who knows?” he joked, likely a reference to the conspiracy theories surrounding the birth of her fifth son Trig, though if alluding to that, this would be Palin’s “third” grandchild, so the joke didn’t exactly make sense. He clarified that the child was not Bristol‘s, and then added exasperatedly, “do they not have condoms up there? When they say ‘don’t retreat, reload,’ they are not fucking around.” And, as no Palin bashing is complete without an intellect joke, he concluded, “If Bristol Palin really wanted to teach her family about abstinence, maybe the place to put that information wasn’t a book.”