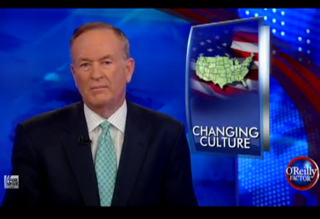 The original “Culture Warrior” Bill O’Reilly began his program last night with a lengthy discussion on how pop culture is destroying America with Laura Ingraham. Ke$ha, Rihanna, tattoos, and “prosti-tots,” Ingraham railed, were besieging the youth psyche in such a way that parents must unite to save the nation’s future. It was standard fare for the Factor, but made it all the more surreal when, at the end of the program, he unveiled the day’s “Patriot”: Mila Kunis, star of a film about two best friends having sex with each other to avoid actual relationships.

Kunis took home the grand prize for agreeing to go to the Marine Corps Ball in November with a soldier who dared asked her out on video (a promise that, as of this morning, she may already be reneging on). At the end of the program, O’Reilly declared her acceptance to the ball “excellent” and wished her and her date much fun at the ball.

And, of course, there’s nothing wrong with applauding her for agreeing to the date– it’s a cute way of her giving back to the troops, and anything that enforces the idea that America’s soldiers deserve to be honored is a good thing. The bizarre thing about the accolade, however, is that it followed a particularly “culture war”-heavy episode of the program, one that opened with Ingraham railing against people like Kunis (though not by name, of course) for leading children astray. O’Reilly’s praise of Kunis’ patriotism below:

Exactly what it is that contributes to the “deterioration of culture” is a moving target, but Ingraham, who had confronted Matt Lauer about Today‘s transgressions yesterday morning, did a good job of touching on the main points: bad parenting, tattoos, Cee Lo Green, the aforementioned lady singers, and a general “sense of entitlement,” as O’Reilly put it, that comes from both the culture and the parenting. O’Reilly told Ingraham that he was “buying into your premise that the culture is deteriorating, and very quickly,” noting that young teen girls “with these giant tattoos on their back” were a serious problem. Ingraham then made the comparison between tattoos and smoking and asked why, exactly, it was that smoking was not okay while getting tattoos was. When Ingraham accused parents of being the biggest problem, O’Reilly added that “a lot of it is driven by the media,” and both agreed that reality TV (Jersey Shore gets a nod, of course) did not help at all– though O’Reilly did not make the tie to Barack Obama that Ingraham attempted. That discussion via Fox News below:


There is much to fault in the discussion Ingraham and O’Reilly indulged in– for one, the fact that O’Reilly makes an immediate jump from the WWII generation to 2011 without noting that much has changed in culture from the late 1980s/1990s to today. Few would argue, for example, that the hit music of that era– NWA and Nirvana come to mind– is somehow more wholesome than Lady Gaga or Justin Bieber. If culture is an indication of illicit behavior, then youth statistics on drug use in 2011 seem to reflect the innocence of our time, as well. Not to mention that one of the songs Ingraham mentions by name, “S&M,” samples the far more explicit 1984 Depeche Mode hit “Master and Servant,” which appears to not have single-handedly ruined the youths of that era despite its controversial message. But this segment’s absurdity is not best illustrated through these facts, but through the shamelessness of this spokeswoman of libertinism who was, somehow, yesterday’s Patriot, Mila Kunis.

It is arguable that no one in America is doing more to “deteriorate the culture” than Mila Kunis. Aside from possibly canceling the date with Marine Sgt. Moore– an affront to the U.S. Armed Forces of Hugo Chavez proportions– Kunis has made a career of her striking beauty in ways that one would imagine Ingraham conservative types should abhor. After a series of comedic appearances and skimpy photo shoots, Kunis got the role of a lifetime alongside Natalie Portman in the Academy Award-winning Black Swan. Sure, the Academy may give the film its blessing, but not only does Kunis sport a tattoo in this film, she also participates in a lesbian sex scene with a known single mother.

She is currently following this up with a film with the institution of marriage squarely in its crosshairs, Friends With Benefits, a film where she has sex with Justin Timberlake to avoid the natural responsibilities of a relationship. Timberlake, you may recall, played the most debauched character in The Social Network and once exposed Janet Jackson‘s nipple to an unprepared audience of impressionable children during the Super Bowl Halftime Show. And, Marine incident aside, Kunis’ publicity appearances for the film have been even more offensive– so offensive, in fact, that her appearance at the MTV Movie Awards with Timberlake was so lewd Bill Maher chided them for their vulgarity.

So what permits Kunis to get away with all this filth while still retaining enough stature to win the “Patriot” title? Is doing something kindly towards the troops a panacea for all moral shortcomings? Would a more openly controversial cultural figure– say, the litany of hip-hop artists O’Reilly has gone to war against– also get a pass if they performed at a USO event or donated money to the families of veterans who lost their breadwinners in Iraq or Afghanistan? Among the many problems with the culture wars, and social conservatism in particular, is that what constitutes appropriate and deviant culture is entirely arbitrary, which makes it one of the few political realms in which the “slippery slope” argument actually works.

If this is the caliber of moral rectitude that O’Reilly will accept in order to be declared an official Factor “Patriot,” then parents today have a lot more to worry about than the corroding influence of Matt Lauer. Or perhaps the culture is just as it has ever been, when Ingraham-types were calling for the prohibition of liquor, the censorship of The Doors, or for Common to be kept away from the White House.