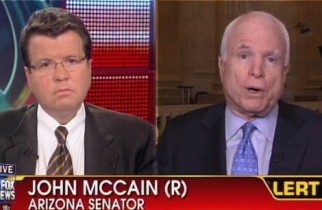 During an interview with Fox News’ Neil Cavuto this afternoon, Sen. John McCain (R-AZ) refused to join other Republicans in openly stating his willingness to break Grover Norquist‘s anti-tax pledge, instead focusing on his own record of being anti-earmarks and avoiding any direct answers about whether or not he agrees with Norquist’s hardline stance on tax revenues.

“I admire Grover Norquist,” McCain said. “I think he stood for the things he believes in. He has a role to play in the scenario of the Republican Party. I have always been against ethanol subsidies, sugar subsidies, all of those things that I thought were wasteful, unnecessary, and frankly the result of special interests. And I am still opposed to rate increases. All of my career, I’ve gone to the floor and fought against these unwarranted subsidies that were directly a result of lobbying rather than the national good.”

Cavuto pressed: “So you disagree with him when he says getting rid of those credits, allowances, breaks, without corresponding spending cuts, breaks the pledge?”

But McCain refused to say that he disagrees, instead turning attention to his own anti-earmarks record: “I don’t know if it breaks the pledge, but I have said that I am opposed to the tax rate increase because I think it hurts the economy and I think most economists that I respect believe that but throughout my career I’ved gone to the floor time after time on the appropriations bills and the farm bills that have the important earmarks, the terrible and egregious subsidies which I have opposed all along and I am sure Grover has been well aware of that.”

Cavuto reassured McCain that Norquist is aware of such an anti-earmarks record, but noted that “what concerns him is that Republicans seem to be running around with the tail between their leg after the election and acquiescing on revenues and letting the Democrats stream roll them and he says they’re going to pay for that two years from now.” He asked the senator: “Do you feel threatened?”

Sensing a hesitance in McCain’s response, Cavuto pushed the senator further: “What he is saying, senator, is that there is much more propensity to come up with creative ways to raise revenue than to cut spending; and that it is disproportionately so. And that Republicans are going along with this like idiots.”

“Well, the negotiations have not seriously begun and people have staked out various positions so we would have to look at the products of the negotiations,” McCain replied.