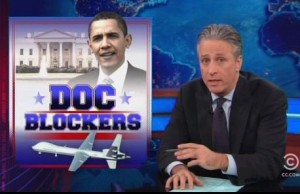 Jon Stewart revisited the national controversy over the drone strike program and the lack of transparency on the part of the Obama administration. Stewart said Obama indicated he was willing to be more open with Congress about the drone memos in his State of the Union, but now the White House is fighting not to make them public. Stewart wanted to know how that “promise of transparency” disappeared in less than two weeks.

RELATED: Jon Stewart Tears Into Obama Hypocrisy And Secrecy On Drones: Only Transparent ‘About The Last Guy’s Secrets’

Stewart immediately contrasted how irrelevant the Obama administration considers the Benghazi information being demanded by Republicans holding up Chuck Hagel‘s nomination with the seeming openness they’ve had on demands by Democrats for the drone memos. Democrat Ron Wyden is leading the charge on this, but since Wyden is from Oregon, Stewart remarked, “Look like someone’s going to get a harsh letter on artisanal hemp paper!”

Stewart noticed that Democrats are willing to hold up the John Brennan nomination in order to get the drone memos, likening their threats to a mobster: “nice nominee you got there, it’d be a shame if something happened to them.”

Stewart then brought up Obama’s pledge during the State of the Union to be more open with the drone memos, though now the White House is willing to negotiate Benghazi information over getting the drone memos. Stewart wondered what happened to his “promise of transparency,” dryly noting that State of the Union promises should at least last longer than New Year’s resolutions.

Stewart then just went to correspondent Aasif Mandvi nervously reporting on how he did not see the memos while clearly being threatened by a drone of death right above him.