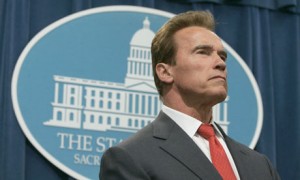 Media coverage of scandals involving sex is often fraught with common pitfalls, none more insidious than the nomenclature surrounding questions of consent. For those seeking to draw a bright line between former Governator Arnold Schwarzenegger‘s just-revealed love child, and IMF chief  Dominique Strauss-Kahn‘s attempted rape case, yes, there is a huge difference, but Bill Maher‘s advice to “get a yes” before you “go after the household help” ignores the inherently coercive relationship between employee and employer.

There are aspects to the Schwarzenegger story which must, necessarily, remain private. What goes on within two marriages (Schwarzenegger’s employee was married at the time) and two families is nobody else’s business. But the idea that this relationship was consensual is not something that should be taken for granted.

The Los Angeles Times, who broke the story, reports that the woman involved has financial considerations, beyond keeping keeping her job, to think of:

In an interview Monday before Schwarzenegger issued his statement, the former staffer said another man — her then-husband — was the child’s father.

She said she voluntarily left her position with the couple earlier this year after reaching a longstanding goal of working for them for two decades. “I wanted to achieve my 20 years, then I asked to retire,” she said, adding she received a severance payment and “left on good terms with them.”

Later Monday, The Times informed the woman of the governor’s statement and she declined to comment further.

Schwarzenegger took financial responsibility for the child from the start and continued to provide support, according to a source who declined to be identified because of the former governor’s request for privacy.

Fair enough, she’s got to do what she thinks is best for her family, but as such, we may never know the circumstances surrounding the beginning of their relationship. What we do know is that Schwarzenegger was in a position of financial and authoritative power over her, and whether he explicitly exerted his authority, its existence makes complete, ungrudging consent a near impossibility. Whatever went on, she would have been acutely aware that her job, and financial future, could have been on the line.

That’s why we have sexual harassment laws, not just so that people can’t be fired for refusing sex, but also so they can’t be coerced into it. This is the reason I never gave Bill Clinton the pass that many other liberals did, because moral issues aside (I’m no prude/saint), he abused his authority over Monica Lewinsky in a way that compromised both of them, and it was his duty not to do so.

The same could be said of David Letterman, whose exploitation of his own staff for sex was passed off as a “personal matter,” and who was almost portrayed heroically for standing up to an extortionist.

Part of the problem is that ignorance of that dynamic is written right into the law, which defines sexual harassment as “unwelcome” sexual advances. If such an advance is made in private (as most surely are), with no method of proof beyond the recipient’s word, how do you determine if the advance was “welcome,” or simply tolerated as a means to maintain employment? In our culture, women in particular are constantly reminded that they will not be believed, so an unwitnessed, un-filmed shoulder rub is a tough thing to stake your job on at a moment’s notice.

Given Schwarzenegger’s history of “groping” allegations (the more evocative term is “sexual assault“), the assumption that the coercion was merely implicit is, itself, a shaky one. According to CBS News, Schwarzenegger didn’t deny the allegations, just that the women involved didn’t protest hard enough:

He stopped short of denying all the women’s accounts, but said none of the women told him at the time that, “You went over the line now.”

It ought to go without saying that there are obvious things you don’t grab upon making an acquaintance (the set that does not include “the right hand”), and that the violator of such boundaries is the culpable party, not the violatee, who risks her entire livelihood by enforcing them.

This has nothing to do with politics. The country would be in much better shape if every Republican were as moderate as Schwarzenegger. This is about belying the notion that Arnold (or Clinton, or Letterman) were just “boys being boys.” They are all guilty, to some degree, of abusing naturally coercive relationships, and to ignore that fact is to codify their actions. To put it in Bill Maher’s terms, you shouldn’t have to “get a yes,” and a “yes” obtained through coercion (explicit or implicit) is no “yes” at all.