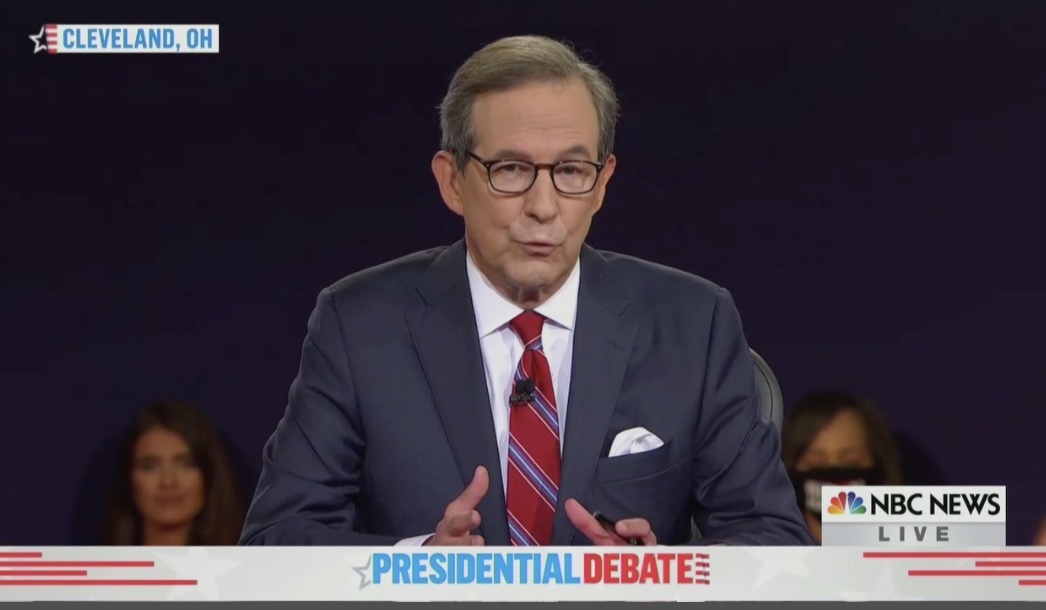 There is an old adage about negotiations that states one can only be truly confident of a fair and equitable agreement when both sides walk away from the table feeling like they each got the short end of the stick. I’m reminded of that old saw following the first 2020 presidential debate from Tuesday night, and the equal amounts of animus directed towards Chris Wallace for the job he did as moderator.

The debate doesn’t merit another recap. It was a cacophonous conflict led primarily by a super-aggro President Donald Trump who seemed dead set on hectoring anyone who had the temerity to say anything while he was at the podium. In the first portion of the debate, a more statesmanlike Joe Biden tried to laugh off the constant interruptions, but his patience wore thin and he shifted gears, eventually telling the commander-in-chief to “shut up” and calling him a “clown.”

Notable Republican pollster Frank Luntz held a post-debate focus group with self-styled undecided voters, many of whom explained Trump’s behavior as “horrid,” “un-American” while calling him a “bully” and a “crackhead.”

While commentary from pro-Trump pundits was predictably fawning, the vast majority of the reaction rightfully deemed the event a “shit show,” “train wreck” and “dumpster fire.”

Little of this is the fault of Wallace.

Not just did he do his level best to keep the train on the rails — but it’s difficult to imagine anyone doing better. He confronted both candidates about interrupting but was far more pointed in chiding President Trump because, well, President Trump was far more disruptive. This is the primary reason why Trump supporters, including many employed by Wallace’s own network Fox News, seemed to blame Trump’s poor performance on the moderator. Talk about blaming deflecting blame. You could also call it working the refs, something Trump has done with Fox News — to alarming success — since the dawn of his 2016 campaign.

On the other side of the aisle, the pro-Biden set expressed frustration with Wallace for not keeping Trump quiet so that Biden could get a word in edgewise. But as I noted in my post-debate recap, one cannot reasonably blame Wallace for the debate when one of the participants completely ignores a basic social contract or behavioral standards we expect of third graders.

The only thing that may have worked to improve the debate was a mute button or a threat to cut a candidate’s microphone. But that’s not the sort audible one can call mid-debate. And so Wallace was left to reprimand Trump in a very public way over his heckling and near-constant interruptions.

Wallace is a renowned interviewer, and the Debate Commission conceded on Wednesday that the issue lies in the tools they provided him, not some supernatural power on the part of the anchor to force Trump’s mouth closed.

It is true that the debate was an unmitigated disaster, that embarrassingly paraded the distressed and tattered state of our national political discourse on a global stage. But as impossible as it is to imagine, it’s also fair to say that it would likely have been much, much worse if nearly anyone else was moderating that train wreck of a debate. One is hard-pressed to consider another political media personality that could have cracked a whip any harder than Wallace did. CNN’s Jake Tapper? WWE’s Dwayne “The Rock” Johnson?

There is an old sports adage that only the losers complain about the referees. And seeing as the majority of the complaints that have emerged on the day after are coming from the Trump camp, it’s not unfair to say that they lost. Given the ugly nature of the spectacle, it’s safe to say we all lost.