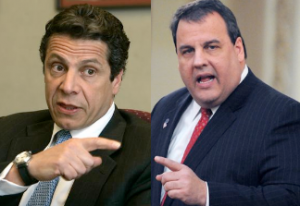 After last Friday’s historic gay marriage vote, one of the most forceful media narratives was the contrast between the leadership styles of Andrew Cuomo and Barack Obama. So it was only a matter of time before people started speculating on Cuomo’s national aspirations.

The governor has hit a high point in his term, polling at an approval rating of 64 percent, after his instrumental work in getting gay marriage passed in New York through a Republican-led State Senate. So for the moment, he is basking in the media limelight. And it is in the midst of this basking that a number of news outlets have speculated that Cuomo is a prime candidate for the 2016 presidential race, whether or not President Obama wins reelection.

The day after the gay marriage bill passed, Chris Cillizza argued that Cuomo has positioned himself as the veritable 2016 frontrunner, while simultaneously dismissing such speculation.

Obviously, it’s early to be talking about the 2016 race since we are more than a year away from the 2012 presidential contest.

Similar articles on the subject are just as indulgent as they are dismissive. It’s as if the media’s saying, “It’s too early to talk about 2016. Absolutely WAY too early to even think about 2016. But since we’re already talking about 2016…”

Politico definitively declared, “The 2016 Democratic presidential race just began.” This is more of a self-fulfilling prophecy than anything. It’s true Andrew Cuomo has emerged as one of the most high-profile supporters of gay marriage in the country, but just because Cuomo is now a liberal hero for passing gay marriage does not mean he would get much support from progressive Democrats. The Nation‘s Ari Melber helpfully explains why:

“[W]hile the same-sex marriage achievement is a terrific one …. Cuomo has otherwise governed New York like a red-state conservative (not just a New York Republican, but a Christie-like conservative) who has made the New York Post editorial page swoon: ending taxes for millionaires, while cutting services for the elderly, children, disabled, ignoring environmental hazards to protect the deep-pocketed gas drilling industry, and waging a war on labor.”

Today, WaPo‘s Adam Serwer piled on, pointing out “[t]he irony of Cuomo as a progressive champion… is that until recently he was being praised most enthusiastically by conservatives.” In fact, Cuomo’s first post-gay marriage poll found that 53 percent of Republicans approved of his job performance, and, even more surprisingly, a May poll found that two-thirds of Tea Partiers gave Cuomo positive marks on his handling of the state budget. National Review‘s Michael Tanner described the Democrat as “Reaganesque” in his approach to tax cuts and state spending, while his colleague Reihan Salam thinks a Cuomo presidential run would represent “an excellent outcome for fiscal conservatives.”

Cuomo himself has dismissed the speculation as “silly,” and tried to put the focus back on the gay marriage victory:

“What it’s really saying is that’s how profound an accomplishment (the legalization of gay marriage) is. What we did…has such an effect nationwide that it’s driving this kind of speculation…

I’m not going to engage or fuel the speculation. I have a very important job to do. We just started doing it and I’m going to focus on this job. This was a great legislative session.”

So we have Cuomo, the Democrat, in one corner. Who’s the media’s handpicked Republican frontrunner for 2016?

Why, it’s Chris Christie, the huggable, lovable New Jersey governor the media won’t leave alone about this presidential race. Maybe at some point in the next year everyone will realize asking him about running for president in 2012 is a waste of time, but that day is a long way off. There is no question that his popularity amongst conservatives makes him an ideal choice for the party’s nomination, and so he, along with his New York counterpart, has been dragged into the 2016 speculation.

Unlike Cuomo’s sudden burst of popularity with the liberal base, Christie has been consistently popular among conservatives nationally for his confrontational speaking style. This morning on the TODAY Show, Rachel Maddow argued that Christie is positioning himself to be the VP nominee in 2012, but two days earlier, Christie remarked that a nominee “that picked me as vice president would have to be sedated.”

Christie 2016 speculation is just as old as Christie 2012 speculation, with one important difference: he’s only ruled out one of them. And despite the fact that 51 percent of New Jersey voters are saying they wouldn’t vote to re-elect Christie, at least he hasn’t hit Rick Scott territory yet.

But of all the 2016 speculation, there’s one question we still haven’t answered yet: what if Obama loses in 2012? Will he pull a Grover Cleveland and try again in four years? Michael Medved seems to think so.

“Whether the jerk wins or loses in November of next year,” gleefully noted one of my stalwart conservative friends, “at least we know the name ‘Obama’ will never, ever show up again on a national ballot.”

I told him not to feel so confident about the president’s imminent disappearance from the scene; in fact, a flurry of revealing White House gossip combines with strategic common sense to suggest that regardless of the result of next year’s election, the Democratic nominee in 2016 will likely bear a familiar last name beginning with ‘O’ and ending with “ma.”

Most obviously, if Barack Obama loses his bid for a second term he will almost certainly “pull a Grover” and run to recapture the White House four years later.

But if Obama does serve two full, consecutive terms in office, Medved believes Michelle Obama could be “a formidable opponent to head the 2016 ticket.” Which begs the question: really? What makes anyone, liberal or conservative, think Mrs. Obama would be interested in running for office?

Is this race just not exciting or interesting enough? There are at least a dozen potential Republicans running against President Obama for the presidency, so looking ahead an extra four years seems excessive. Then again, the media can’t help but stay in permanent campaign mode.

A Cuomo-Christie matchup in 2016 would be an admittedly awesome presidential race. A competition between the governors of New Jersey and New York would be like the Subway Series of presidential elections (or something, I don’t follow sports). However, when he was on Morning Joe earlier this week, Christie went out of his way to praise Cuomo for his leadership qualities.

He gets in the room, he gets his hands dirty, and he gets it done. He’s not sitting back, waiting to say, “Oh, let’s see how everybody comes on this, and let’s see if I can find a little room for me to wriggle in here.” He sets the debate, he defines the debate, and then he compromises on the areas he needs to compromise on. So I think Governor Cuomo’s doing a great job. You’re right, he and I don’t agree on the gay marriage issue, but that’s okay. What I’m looking for is somebody who’s a leader. 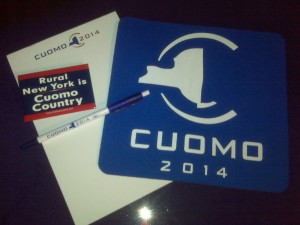 blameless when it comes to fueling the media speculation. A few months ago at the Democratic Rural Conference in New York, attendees received gift bags with mousepads reading “Cuomo 2014,” a tacit announcement of his intentions to run for reelection in the next gubernatorial race, and it’s certainly easier to run for president as an incumbent than a “former” politician.

But for now, both Christie and Cuomo have responsibilities to their states that they have to focus on. Were you aware that the New Jersey state legislature is currently debating a budget proposal that, if both parties can’t agree upon by tomorrow night, could lead to a shutdown of the state government?

Let’s wait at least until either governor is reelected (or not) before we start talking about their chances at the presidency.