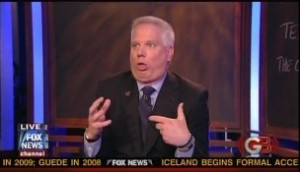 Earlier this week, outgoing Fox News host Glenn Beck illustrated David Carr‘s criticism of Midwesterners as “neanderthals” by doing an offensive caricature of a mentally disabled person. Mediaite’s Frances Martel wrote a relatively mild critique of Beck’s performance, given the level of offense, and for her trouble, conservative website Big Journalism has accused Martel of anti-disabled bigotry, and defended Beck’s vile minstrelsy by (I’m not kidding) asserting that those offended are mentally deficient.

New York Times media reporter David Carr started the fun with a remark, on a web-only segment of HBO’s Real Time,about people in the “middle places” with “the low-sloping foreheads.” (Carr later apologized for the remark on Twitter.)

Beck then reacted on his radio show by flashing his laminated Godwin’s Law Platinum card on his radio show, then followed up by sarcastically enacting Carr’s vision of mid-westerners as cavemen… by doing the kind of spitting retard character you’d see at a bad open mic night. In fact, it’s the kind of impression you might have seen in former Wonkette editor Jack Stuef‘s stand-up act, before he saw the light about mocking the mentally disabled.

Maybe I’m just being sensitive, though. You tell me if you’ve ever seen a caveman impression like this:

When I saw the clip here on Mediaite, I saw red, and to be completely honest, I was a little pissed off that Frances had let Beck off so easily. That’s not a knock on Frances; most of the writers on this site are considerably cooler-tempered than I am. Frances even took the time to deconstruct Beck’s larger point, but noted that the “nuance of (Beck’s) joke was entirely lost, to the point where it would be perfectly valid for those with handicaps and their loved ones, or anyone with a sense of decency about how the disabled should be treated in our society, to be offended by this conduct.”

Many members of our staff have written candidly about how mental disabilities have touched their own lives and loved-ones. I bring this up not to give us any additional moral authority on this issue, but to illustrate that for us, this is not about scoring points, political or otherwise. Glenn Beck has consistently lauded this site for its fairness, even when we’ve been critical of him. The social estrangement of the mentally disabled knows no partisan or ideological boundaries.

In fairness to Beck, it was probably not his intent to mock the mentally disabled. That’s kind of the point, people do it without even thinking about it. President Obama probably didn’t intend offense with his “Special Olympics” crack (for which he later apologized), just as Rahm Emanuel probably meant only to insult liberals when he called some of them “retarded,” just as Keith Olbermann intended only to slam John McCain by showing the then-candidate for president on a Special Ed “short bus.”

So maybe the best way to deal with this, except in extreme cases, is to try to illuminate, rather than excoriate. If that’s the case, Frances is probably the better person in this case.

Which makes Big Journalism‘s reaction all the more confusing. They accuse Frances, in their headline and elsewhere, of “compar(ing) the mentally disabled to neanderthals.”

This is the familiar defense of bigots everywhere, the notion that the person who notices the bigotry is actually the bigot. You know the drill. If you’re offended by a photoshop of a watermelon patch at the White House, it’s because you associate black people with watermelons, not because racists have cultivated that stereotype, and many others, for generations. If Glenn Beck’s impression of a caveman is exactly like the caricature that has been used for decades to mock the mentally disabled, you’re the bigot for noticing.

In their zeal to slam Frances, Big Journalism goes head first into the irony rabbit hole, essentially calling her mentally disabled, saying that “Anyone with the listening comprehension of a third-grader could deduce that Beck was personifying Carr’s prejudice (sic) stereotype of Midwesterners.”

It’s entirely possible that the “Big Journalism Editorial Panel” really does think that Frances Martel is some kind of anti-disabled bigot, but I doubt it. This post reeks of disingenuous score-settling. Fair enough. I’m sure there were many Beck detractors who jumped all over this with two feet, not because they give a rat’s ass about the disabled, but because they don’t like Beck.

While my initial reaction to this kind of pissing match is anger at the exploitation of this issue to score cheap points, the wiser, more productive course is to ask people to walk a mile in the shoes of a disabled person, or their loved ones, and to offer understanding in return. There are probably very few of us who have never made a “retard” joke, even those of us who were later touched by those same disabilities. That includes me.

About fifteen years ago, I was at a playground with my kids, and I was gratified to see that my oldest, who has Asperger Syndrome, had found another child to play with. At the time, he wasn’t able to communicate verbally, only echoing some of what people said to him. As I was getting ready to leave, I walked over to them, but they didn’t see me. I watched them for a minute, my son smiling down at his playmate from atop the jungle gym. Then, I noticed that the kid was staring intently at my son, smirking, and whispering “Asshole,” obviously amused that my son couldn’t understand him.

The episode made me angry and sad at first (and glad, for that moment, that my son didn’t understand), but it also made me realize that such behavior isn’t the result of evil (the child was younger than my son, maybe six years old), but of a weakness in human nature, one that extends well beyond treatment of the disabled.

Yes, people like Beck, Rush Limbaugh, Keith Olbermann, and Jack Stuef are free to make whatever jokes they like, and we’re all free to laugh at them, but we’re also free to stop and think about what that says about us.