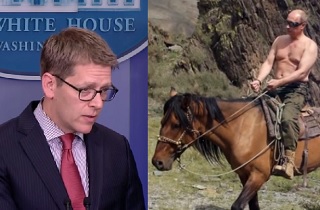 Speaker of the House John Boehner made another attempt to get President Obama into the canyon-bound car that his party is gleefully flooring toward a government shutdown and/or default, releasing a web video wondering why the President negotiates with Vladimir Putin, but not with Boehner. At Thursday’s White House briefing, Press Secretary Jay Carney assessed Boehner’s video as “a little odd bit of Putin envy on behalf of the Speaker.”

Boehner’s video, already suffering from the dubious premise that the President should throw himself in front of Thelma and GOP Louise, also seems to compare his own caucus with Syrian dictator Bashar al Assad. That’s in line with many of the other metaphors used to describe the default/shutdown tactic, but not one you’d expect Boehner to brag about. There’s also a little bit of gay-baiting thrown in, in the form of a shirtless Putin pic:

At Thursday’s briefing, CNN Chief White House Correspondent Jim Acosta also tried to hang the GOP’s DOA strategy around the President’s neck, asking “Jay, what has the President done in the last 24 hours to prevent a shutdown or default?”

“Well, he didn’t make any videos,” Carney replied, “but he did meet with leading members of the business community to talk about the need for all of us to work together to grow the economy, ensure that the middle class is strong and getting stronger, and to avoid both a government shutdown and a default.”

Later in the briefing, Acosta returned to the theme. “You mentioned the video,” he said. “You’re obviously referring to Speaker Boehner’s video. Is that right?”

“That his office put out this morning, saying that the President is more willing to negotiate with Vladimir Putin than he is with House Republicans,” Acosta continued.

As Carney began to answer, Acosta added “He has spent more time with Vladimir Putin.”

“That is irrefutably false,” Carney said. “The President has spent an enormous amount of time with John Boehner over the years. And I have no doubt and you can expect that the President will be in conversations with congressional leaders in the coming days about the need to deal with these pressing deadlines. The video I thought demonstrated a little Putin envy, a little odd bit of Putin envy on behalf of the Speaker. But maybe he can explain that.”

The response drew a laugh, but Carney missed an opportunity here to push back against the burgeoning trend of mainstream reporters abandoning logic and objectivity in order to score a good sound bite. The threat of a government shutdown/default is a wholly-owned subsidiary of the Republican Party, no matter how badly they, and certain members of the press, want it not to be.