Michael Cohen has taken his divorce with Donald Trump to the next level.

In the past, people who visited Cohen’s Twitter profile would notice his bio where he proudly declared his status as “Personal Attorney to President Donald J. Trump.” However, if you visit @MichaelCohen212 as of today, you will notice that something is missing. 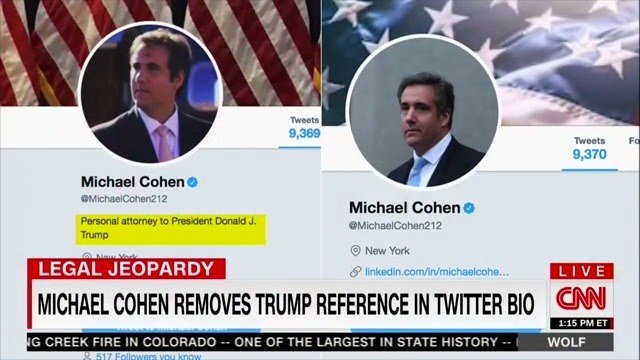 Ever since Cohen’s spoke to George Stephanopoulos earlier this week, the ex-Trump lawyer prompted speculation that he’s seriously thinking about flipping on his old boss and cooperating with Robert Mueller.

“It looks like he’s moving closer and closer to the guy that might flip,” writer Lauren Burke said on CNN about Cohen’s latest social media move.

ABC News reported Cohen’s already preparing to end his legal defense coordination with Trump’s team, and if he’s about to work with the federal authorities looking into his affairs, this could prove to be a significant development regarding the investigations into the president.

The scrubbing of Cohen’s bio comes as a new Daily Beast report indicates Cohen feels like Trump has been shunning him more and more since taking office. The reports suggests Cohen is frustrated with no longer being part of Trump’s inner circle, and is also “scared” of being made into a fall guy as investigations into Trump continue.