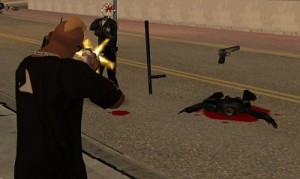 Violent video games have become a popular post-Newtown scapegoat for gun violence among two distinct groups: the people who would like us to focus on everything but effective gun regulations, and the people who humor them by pretending the issues have some sort of parity. The latter group, which even includes President Obama, are probably acting wisely by going cautiously along with the notion, rather than be distracted by fighting it, but the truth is that even the study that anti-video game folks cite specifically says that access to guns is a much bigger problem.

National Rifle Association executive Wayne LaPierre leaned heavily on videogame violence in his initial effort to draw the nation’s attention away from the portable arsenal that was used in the horrific mass shooting at Sandy Hook Elementary School, and along with movies and mental illness, video games became a part of the larger conversation about reducing gun violence. In LaPierre’s case, that concern appears to have been both cynical and hypocritical, but violent video games have also attracted the attention of good-faith actors who want to leave no stone unturned in protecting children.

For example, my good friend and colleague Matt Lewis writes, for The Week, about violent media, and some of the discussion from MSNBC’s Morning Joe program, in which co-hosts Mika Brzezinski and Joe Scarborough call for the shaming of the movie and game industries:

“These video games are frightening,” Brzezinski averred, “because if a child is socially isolated and grows up into teenage years and even early adulthood, they’re also sexually frustrated. And they’re trying to figure themselves out alone. They sit in a room, and they watch these violent games and they basically simulate mass killings. It is… a form of release or arousal for them.”

Mika and I can probably agree there is an inverse relationship between consensual sex and mass shootings. Yes, getting laid more frequently would probably dramatically decrease the likelihood a young man might become a mass killer (though other social ills would increase).

Enter Panelist Donny Deutsch, who suggested it would be smarter politics to ignore our violent media culture and instead just “get the guns.” Joe Scarborough fired back. “I don’t want to let people like Quenton Tarantino off the hook,” Scarborough harrumphed. “I don’t want to let people like your friends at Activision off the hook — people that make billions of dollars selling mind-numbing violence.”

Forget censorship, Scarborough seemed to be arguing: We must shame entertainment executives. As someone who opposes censorship, I concur.

Scarborough, it should be noted, has been extremely vocal about pushing Republicans to come to Jesus on reasonable gun regulation, including an assault weapons ban, and Deutsch goes too far in suggesting we completely ignore the issue of violent media, but it is important to keep it in perspective. President Obama’s decision to invest in a CDC study on guns and video game violence is exactly the right course, because the research on the subject, to date, is hopelessly inadequate. For example, the study that Mika cited, which gets tossed around every time there is a discussion about video game violence and guns, is actually a review of about 130 articles and studies on the subject, and although it suggests a link between real-life aggression and video game violence, the study also points out that “many of the studies included in the meta-analysis had statistically marginal significance, were methodologically flawed, lacked valid measures of aggression, or were not published in peer-reviewed journals.”

There’s also a 2005 MRI-based study whose researchers trumpeted their findings this way:

“There is a causal link between playing the first-person shooting game in our experiment and brain-activity pattern that are considered as characteristic for aggressive cognitions and affects,” said René Weber, assistant professor of communication and telecommunication at MSU and a researcher on the project. “There is a neurological link and there is a short-term causal relationship.

“Violent video games frequently have been criticized for enhancing aggressive reactions such as aggressive cognitions, aggressive affects or aggressive behavior. On a neurobiological level we have shown the link exists.”

A “short-term causal relationship” isn’t all that compelling, and is even less so when you read on. The study’s participants were “Thirteen German male volunteers between the ages 18 and 26,” a tiny sample, and the researchers concluded that even violent video games probably do more good than harm.  Said researcher René Weber, “Although there are probably more positive effects of playing all types of video games and even violent video games, such as socializing with peers or improving cognitive and physical abilities, it is important that we continue to explore this causal relationship we have shown in this research.”

Even given the inadequacy of research into links between video game violence and real-life mayhem, I, and many parents like me, remain willing to be convinced. To our eyes, the realism and repetition of today’s first-person shooters looks like conditioning, and when faced with a tragedy like Newtown, it’s tough to blithely dismiss these concerns.

On the other hand, and it’s a big other hand, limited studies of school killings cut against a role for violent media:

The attorney for Lee Malvo, the young “DC Sniper,” claimed that the teen had taught himself to kill by playing Halo on his Xbox game console. “He’s trained and desensitized with video games … to shoot human forms over and over.”

…In court, Lee Malvo admitted that he trained by shooting a real gun at paper plates that represented human heads. Also, Malvo had a long history of anti-social and criminal behaviour, including torturing small animals – one of the best predictors of future violent criminal behaviour.

It’s unlikely that Harris and Klebold’s interest in violent video games or other violent media played any significant role in their actions. An FBI investigation concluded that Klebold was significantly depressed and suicidal, and Harris was a sociopath.

Video game popularity and real-world youth violence have been moving in opposite directions. Violent juvenile crime in the United States reached a peak in 1993 and has been declining ever since. School violence has also gone down. The U.S. Secret Service intensely studied each of the 37 non-gang and non-drug-related school shootings and stabbings that were considered “targeted attacks” that took place nationally from 1974 through 2000.

The Secret Service found that there was no accurate profile. Only one in eight school shooters showed any interest in violent video games; only one in four liked violent movies.

Maybe violent video games have some limited role in some real-life violence, maybe they don’t, but all of the tragedies that have led to this point have one thing in common: access to firearms. Even the study that anti-video game activists like to cite says so:

A wide variety of other factors are more important antecedents of aggression than violent video games, including child abuse and neglect, victimization, bullying, drug and alcohol abuse, exposure to violence in the home, neurobiological indicators, low socioeconomic status, and access to guns.

Even if reliable research existed, controlling children’s access to video games is mainly up to parents. The video game industry has already instituted a voluntary ratings system, which many retailers abide by. Unfortunately for Wayne LaPierre, it is constitutional to regulate firearms, but it’s unconstitutional to penalize retailers for selling violent games to kids. What pinko Supreme Court Justice rendered that opinion, in 2011? The same one who decided the government can ban assault weapons:

“Like the protected books, plays and movies that preceded them, video games communicate ideas — and even social messages — through many familiar literary devices (such as characters, dialogue, plot and music) and through features distinctive to the medium (such as the player’s interaction with the virtual world),” Justice Scalia wrote. “That suffices to confer First Amendment protection.”

Legitimate research on video games is a fine idea, but no one should be fooled into thinking it’s anywhere near the ballpark of sensible gun regulation, or that measures aimed at curbing video games are in any way a substitute for any of the crucial gun reforms that are needed. Yes, let’s “have the conversation” about games, but let’s act on guns.