President Obama’s Mandate Is The One-Way Ratchet Of Progress 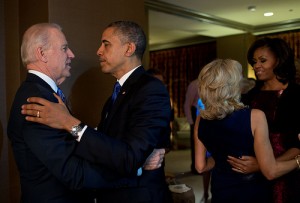 No sooner had the election been called for incumbent President Barack Obama than his opponents tried to salvage some vestige of victory by claiming that the President would not enjoy a governing mandate (calls for revolution notwithstanding). But even before a single vote was cast, the mainstream media telegraphed a similar narrative, communicated most tellingly by Politico‘s Jim VanDeHei and Mike Allen, who predicted weakness from the President’s lack of white power at the polls. Regardless of the President’s final margin of victory, though, it was achieved in a country that’s moving in his direction, and not going back.

When all the votes are counted, President Obama will have won a resounding electoral victory, and a somewhat narrower popular vote win. The accomplishment is dimmed by the fact that he achieved this against what everyone agrees was a weak opponent, but the President’s greatest foe in this election was always a committed and voluble opposition. A quick glance at Tuesday night’s exit polls shows exactly what that opposition looked like; the President didn’t win a single category of white voters.

But the President did get a lot of white votes, and his opponent was absolutely demolished in every other category, winning just 6% of black voters, 27% of Latino voters, and 27% of Asian voters. The country is not going to get any whiter, which is a problem for a party that relies so heavily on 60% of white people. If President Obama does absolutely nothing for four years, the Republicans must still change, or die. A hard line on immigration, attempts to take away people’s health care, and gutting of safety nets isn’t going to cut it tomorrow, any more than it did last night. Neither will unsubtle appeals to racial resentment, which actually even offend some white people (the good ones).

Two states, Maine and Maryland, approved ballot measures legalizing same-sex marriage, while another such measure is leading in Washington state, and Minnesota defeated an amendment to ban gay marriage. America is not going to get any less gay. If President Obama does nothing for four years, the Republicans must change, or die. Denying rights to people pisses them off, and it pisses off their friends.

The results for marijuana legalization were a bit more mixed, with Colorado and Washington state passing measures legalizing small amounts of pot for any use, and Massachusetts legalizing medical marijuana by a wide margin, while Montana banned medical marijuana, and Arkansas and Oregon voted not to legalize it. We’ll see what happens, but when other states see Colorado fattening its coffers with ‘dro dough, and attracting lucrative cannabusiness, I’m betting America isn’t going to get any less high. President Obama hasn’t exactly been the Commander-in-Cheech, but even if he does nothing for four years (like he promised), the Republicans must change, or get harshed.

Finally, the President won the women’s vote by 11 points, 55% to 44%, and Florida voted down a ban on public funding for abortion. America isn’t going to get less female, and Gyno-Americans aren’t going to get less anti-rape, less anti-fair pay, or less wanting to plan their own lives, reproductively and economically. If President Obama does nothing, Republicans must change. Say it with me, boys: “settled law.”

When the White House released that Pete Souza photo of the First and Second Couples reacting to the news of President Obama’s victory, there were chuckles from the press at the DCCC event at the unintentional subtext of the picture, but when you think about it, that shot says it all. They look kinda gay, kinda high, and all kinds of mixed-race and gender. That’s a picture of President Obama’s mandate, a country that has moved forward in ways that can’t really be undone. Even if President Obama does nothing for four years, the Republicans have to catch up a little, or be left behind.