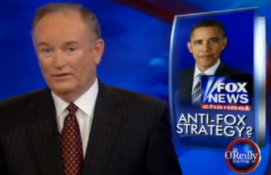 Watching a few hours of Fox News these days amounts to a non-stop infomercial opposing  the Obama Administration’s effort to reform Health Care.  While there is always room for a healthy debate on the issues, please don’t look to Bill O’Reilly, Sean Hannity or Glenn Beck for a measured discourse – they  rarely, if ever, present a constructive solution to the current health care problems (though there is the occasional admission that there is need for reform.) No single entity seems more entrenched in the opposition to the health care reform than Fox News.

The political bias of cable news is a time-worn tale, particularly with Fox News. But  it seems like that narrative has made us so numb to blatant subjectivity that we can no longer see clear bias when its right in front of our faces. Does no one care anymore? Or maybe it’s just August and everyone’s on vacation?  Simply put — the amount of propaganda put forth from Fox News is far from fair and balanced — they are very near inciting riots.

Not so? If you watch Glenn Beck or listen to his radio show, you hear a lot of phrases like “waking the sleeping giant” and “we don’t want this country to become Russia.” Cut to the language of protesters confronting their elected officials in the town halls of the past week and one hears the same exact phrases spoken through held back tears and barely restrained emotion.

During Wednesday’s “Talking Points Memo,” O’Reilly made the rather bold claim that the Obama administration is specifically targeting Fox News. How did he make the deduction? Because White House spokesman Robert Gibbs recently said “Well, I think we all have something to lose, Matt, if we let cable television come to town hall meetings and kill health care reform for another year and put the special interests back in charge.”

Fox News – particularly O’Reilly – have always been quite savvy at “punching up” – that is, targeting entities that are well above their accepted station (i.e. their current debate with GE). Does claiming to be engaged in a “fight” with the White House serve their purpose? In terms of pleasing their audience it does — just hear the rabble rousers yell to their democratically elected representatives that they want their country back. From a publicity standpoint it’s a genius move – evil genius maybe.

There is  legitimate criticism that the Obama White House has not been able to articulate their new health care agenda in a simple and understandable way. The truth is that it’s currently a very complicated issue. But isn’t that part of the problem — that unnecessarily complex solutions create a multitude of loopholes that allow big corporations to turn a healthy profit? Is that how a free market is supposed to work? Is that the American way, or is it the problem?

The problem is not just with Fox News, nor with cable news in general. We are truly in a nation divided by media consumption, exacerbated by the rise of opinion journalism (at the cost of capital J – journalism). As Kurt Andersen has said, American’s now only consume media the reaffirms their pre-existing opinions.  The vacuum of differing views has been profitable for a number of media outlets, but what cost victory?