Whistleblower Story Looks Bad, But Will It Help Trump?
Opinion

The Whistleblower Story Looks Horrendous, But It’s More Likely to Help Trump Than End His Presidency 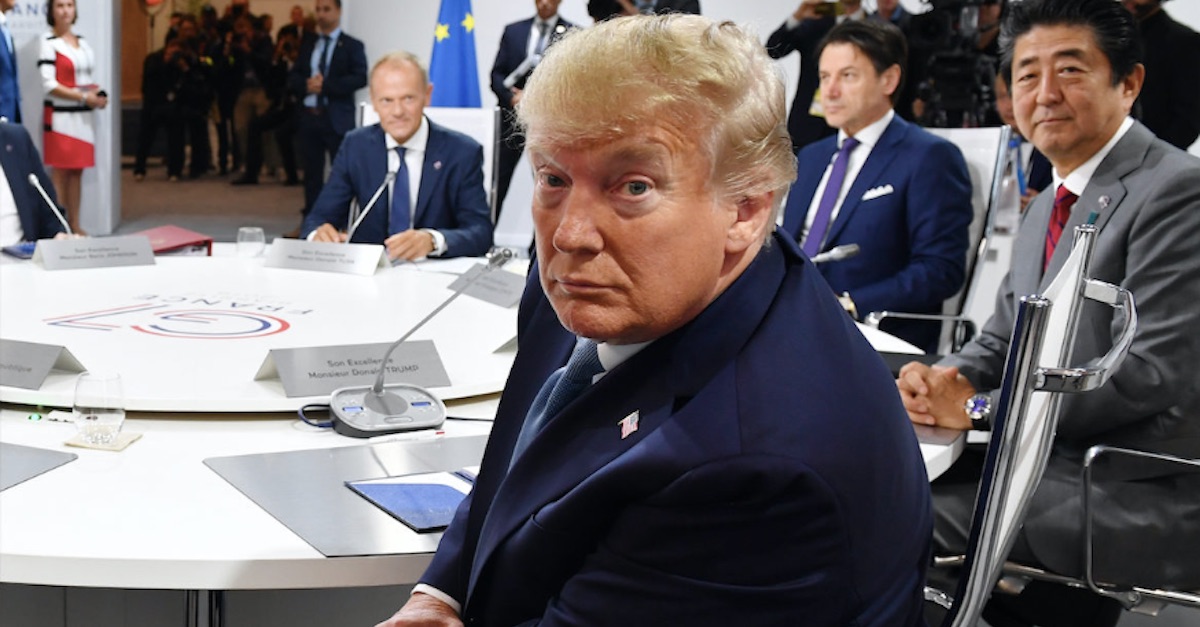 For the sake of argument, let us stipulate that everything that is being reported about the emerging scandal that appears to involve President Donald Trump promising aid to president of Ukraine in exchange for providing dirt on former Vice President Joe Biden’s son’s business ties there is 100% accurate. Assuming that the whistleblower within the intelligence community who filed the complaint is not badly politically compromised, and there is at least a good transcript of these apparently multiple interactions, in a rational world, Trump would be impeached and likely removed from office.

We no longer live in a sane universe, however, and based on the very excited reactions of Trump critics over the past two days, many have apparently have forgotten that, as Dorothy famously said in The Wizard of Oz, “We’re not in Kansas anymore.” I’m here with a painful, though healthy, reminder that this is still the maddening reality in which we live, and that there is actually a better chance that Trump ultimately benefits from this latest outrage than gets severely punished.

Sure, on paper, things look bleak for Trump on this. His own lawyer, the once highly-respected Rudy Giuliani, looked panic-stricken while essentially admitting on CNN and on Twitter last night that the story is true. The Trump DOJ appears to be in full Bill Barr-led cover-up mode, and the allegations are absolutely worthy of impeaching a president, especially one who is historically very unpopular.

However, there are several reasons that I am extremely skeptical that this story will really be the “game-changer” for which people like me — who think Trump is totally unfit to be our president — have been so desperately hoping.

The first is that it seems unlikely that there will be tapes of these conversations, at least not ones that will be released to the public in any sort of timely fashion. Without tapes — just as I correctly predicted last year with regard to how and why Bob Woodward’s anti-Trump book would have no negative impact on him politically — in today’s media age the event might as well have never happened. Or, at the very least, Trump’s meaning or intent can always be easily spun to his supporters.

The second factor is that there is no real impact on anyone’s lives as a result of what Trump has apparently done here. The vast majority of Trump fans could not find Ukraine on a map, and would probably be happy (as pathetic as this is) if a few measly million dollars of our tax money was being used to try to help him win re-election by causing a foreign country to harm the opponent beating him the most in polls.

You can almost hear “Cult 45” cheering, “He’s just trying to save the country by fighting corruption and socialism!”

The third element is that all of this has obvious echoes of the investigation into the Russian influence in the 2016 election which, outrageously, Trump is perceived as having won. He has already set the narrative that this is all part of a “witch hunt” against him, and has a proven playbook (apparently the same one that O.J. Simpson once notoriously used) for how to beat this kind of wrap.

Fourth, since he somehow survived Russia-gate, there is an aura of invincibility around Trump within Republican circles that will keep top GOP lawmakers from speaking out against him because they have no reason to believe that this time he will finally go down. Related to this is the dangerous probability that, thanks to how he rewarded those loyal to him and punished those who were not during the Mueller probe, anyone on the fence about risking their careers to back this story are not likely to do so because they have no reason to be confident Trump won’t end up on the “winning” side yet again.

Based on what we currently know, Trump could (assuming Speaker of the House Nancy Pelosi lets Rep. Jerry Nadler and Rep. Adam Schiff retrieve their balls from the jar on her desk) be impeached over this, and I do think it could hurt him a little bit in polling. But he is not going to be removed from office based on the current understanding of this story, and there is actually a scenario in which is he ends up benefiting politically from this fiasco.

If this story becomes the “New Russiagate” for the news media and Democrats, and does end up being the primary fodder for his impeachment, one of the ways Trump and his cronies will fight back will be to make the story all about Joe Biden. Biden and his son may be totally innocent in this matter, but his name is going to be constantly attached to it and the facts are not going to restrain Trump and his state-run media from concocting some sort of horrible allegation against the Democratic frontrunner.

We no longer live in a country where facts or truth matter at all. Under this scenario, I can easily see some Democratic voters simply perceiving that Trump and Biden are connected in some sort of scandal and, mostly because they just get tired of hearing about it, and fear that this could harm him in the general election, they slowly move on to some other “safer” candidate.

It would then be POSSIBLE that, in the ultimate maddening injustice, Trump could actually get rid of Biden, by far his toughest general-election opponent, without having needed Ukraine’s direct help to do it and without ever even having to face him. The most likely scenario would then be he takes on Sen. Elizabeth Warren who would be a much easier matchup for him.

Obviously, this is mostly wild — and yes, pessimistic — speculation, and there is a ton more for us to learn about this story. But for now, please do not ever forget that, at least until further notice, nothing, and I mean nothing, really matters in Trump World, even when it absolutely should.