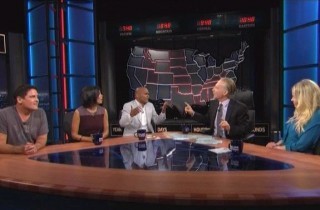 Friday evening’s episode of Bill Maher‘s Real Time got pretty heated when several panelists debated whether the “birtherist, racist” elements of the conservative movement are “organic” or are a centralized plan from the controlling forces of the party.

“I don’t think Mitt Romney actually killed this guy’s wife,” Maher continued, “but you know what, it’s kind of just deserts for the people who Swift Boated John Kerry.”

“And it’s going to get a lot worse because of Citizens United,” added Mark Cuban.

“This is the first time the Democrats have not… crawled up into the fetal position and just taken it,” MSNBC’s Alex Wagner added to audience applause. “We’re talking about a [Republican] Party here that, if we’re talking about inflammatory and wildly unfounded accusations, this is a party that’s still asking for Obama’s college transcripts, that is still furthering this birtherist, racist narrative that he was born outside of the United States.”

CNN contributor Reihan Salam took issue with that characterization, noting, “You’re talking about political movements that are incredibly diverse, these are organic eruptions–”

The rest of the panel then exploded into crosstalk, with Cuban and Wagner shouting, “Organic?!” and “Are you kidding me?”

Guest Chelsea Handler intervened and said to Salam: “First of all, calm down. That’s absurd. This is coming from a party backed by Karl Rove raising a billion dollars with these anti-defamation ads across the country against any Democrat who is running for any seat anywhere.”

“Respectfully,” Salam shot back, “it’s not Karl Rove who planned that. What I mean by that is that, okay, Joe Biden said some nasty stuff about Indian-Americans in 2006, he didn’t have some secret plan to do some terrible thing. He made a mistake. … People get sloppy, people get messy. We are in a very diverse company in which you have a lot of folks who rally under the Democratic or Republican banner who have a lot of crazy views that Barack Obama isn’t going to take ownership of, and Mitt Romney isn’t going to take ownership of.”

“That’s the nature of democracy,” he continued, “it gets messy. And the idea that this some kind of centralized plan is a myth. And it’s simple-minded, and I think it’s wrong.”

This then led to a transition to Maher showing the pro-Romney “It’s okay to make a change” ad, which Maher described as a “subtle racist message.”

“What on earth are you talking about?” asked an incredulous Salam, who threw his hands up.

“It lets people off the hook for saying, ‘You know what? I tried the black thing. It just didn’t work out,’” said Maher.

“Not everyone is as race obsessed as you are, Bill,” replied Salam.

Maher then accused the Republicans of having a “Messiah Complex” because Ann Romney told NBC that her husband could “save the country.”

This prompted Salam to challenge Maher over whether he’s never heard Michelle Obama say “over-the-top” things about her own husband.