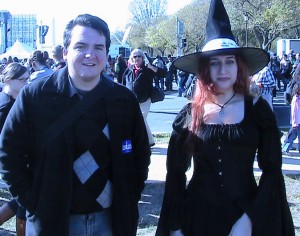 Covering the Jon Stewart/Stephen Colbert Rally to Restore Sanity and/or Fear on Saturday was an exhausting, frustrating experience. The crowd size made navigation a real challenge, and the press accommodations didn’t really offer anything you couldn’t see on C-Span.

Even so, I managed to get some great pictures, and I ran into a few interesting characters, including Slate’s Dave Weigel, on his day off, and got his thoughts on the rally. As you’ll see, he was a much better interviewee than evangelical Sithian Darth Vader and not-so-super hero Unemployed Man: (Interruptions provided by Redstate’s Ben Howe and Newsbusters’ Steve Gutowski. Sunglasses by Brittany Cohan.)

Despite Stewart’s inspiring Kum Ba Yah speech, the crowd was clearly an anti-Tea Party lot, but as Weigel notes, they also weren’t buying the disappointment of the “professional left” over President Obama’s first two years in office. The argument can be made that this is the new “middle,” but are enough of these folks sufficiently engaged to make a difference on Tuesday?

Outsize importance will undoubtedly be placed on the size of the crowd relative to Glenn Beck‘s Restoring Honor Rally, a pointless debate that is already resulting in the kind of sniping that Stewart’s rally was supposed to tamp out. For what it’s worth, yesterday’s crowd was definitely bigger and more densely-packed than the Restoring Honor crowd, covering a larger (Reflecting Pool-less) area.

However, the true merit of a thing cannot be measured by how many people  like it. If you want to have the discussion on those grounds, you must first stipulate that Milli Vanilli pwns Muddy Waters. It’s not a tie, but they were both big crowds, both significant events, as was the One Nation Rally.

The debate over crowd size helps to prove Stewart’s point about the current lazy state of our media culture, but he misses an important factor. Kooky kandidates and head-stomping didn’t arise spontaneously from an oyster shell. This is, apparently, what people want because this is what they buy. Even now, there is plenty of substance to be found amid the titillating chum of cable news, but nobody wants it.

Case in point: I have sat through hours of White House briefings, listening as 98% of the questions concern substantial policy or political matters, yet the only clips you ever see on the cable nets are the “Gotcha!” sound-bites. As long as journalism is a primarily profit-driven business, there will be little attention paid to serving the public good.