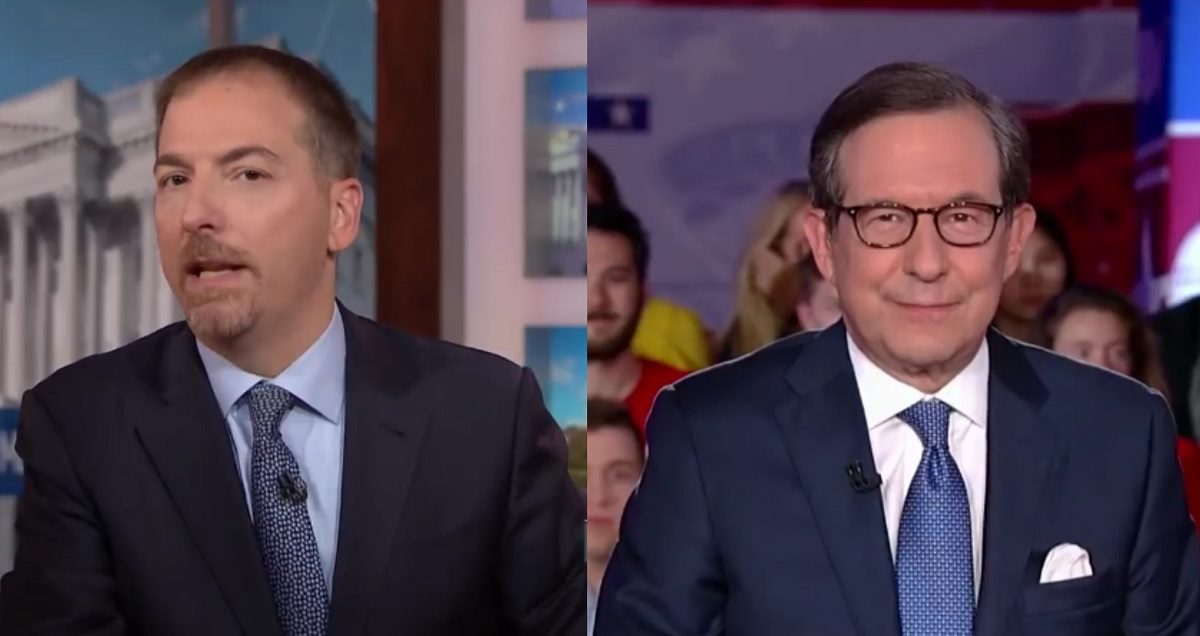 This weekend, Fox News anchor Chris Wallace and NBC News’ Chuck Todd stepped into the arena of abysmal media coverage on abortion rights, and Wallace was the clear winner simply by being less grossly irresponsible than Todd.

The decades-long hot war on women’s reproductive rights has boiled over this year, and particularly over the past several weeks, which have seen draconian and dangerous legislation passed in states like Alabama and Georgia. It is in that context that Wallace and Todd (worst TBS cop show never made) interviewed several leading political figures on the issue this past weekend.

Let’s begin with Wallace, who distinguished himself in an interview with Minnesota Senator and Democratic presidential candidate Amy Klobuchar by getting a few facts right, and only making one grossly irresponsible statement.

He began by asking Klobuchar what she would do, as president, if the Supreme Court overturned Roe v. Wade, which was fine. But then, he twice pressed Klobuchar on whether Democrats are too “extreme” on abortion, and displayed an ad calling the Democrats the “party of death.”

Wallace then asked Klobuchar about “late-term abortion,” which is a misleading term that anti-choice activists have made common through usage, and has become shorthand for abortions performed after 24 weeks. In medicine, a “late-term pregnancy” begins in the 41st week.

That’s a contrast to other media figures who dishonestly frame this question around nonexistent “9-month abortions,” or abortions up to “the moment of birth,” as Wallace’s Fox News colleagues did at their Bernie Sanders town hall.

But as Klobuchar noted in her response, the precedent set in Roe v. Wade covers the question of restrictions on abortion based on gestational age, which was narrowed in Planned Parenthood v. Casey. So far, though, Wallace had remained within the journalistically accepted parameters of the debate, such as they are.

Then, Klobuchar brought up Trump’s dangerous lie about Democrats supporting the “execution” of babies after they’re born, and Wallace called that lie an “overstatement.”

As heinous as that one slip-up is, it couldn’t knock Wallace out of the top spot when compared with Chuck Todd‘s performance with a pair of guests on the issue of abortion.

I wrote about a major gaffe that Bernie Sanders committed during one of those interviews, when he told Chuck Todd that sex-selective abortion is “a concern,” and when asked how he would deal with it in law, replied “I don’t know how, at this particular point, I would deal with it, but that is an issue that we really have got to deal with.”

Sanders, who has already been called out for saying that nonexistent abortions “up to the moment of birth” are “rare,” was clearly unprepared for this question, and completely unaware of the abortion rights community’s near-unanimous stance on the issue. While rights groups recognize cultural “son preference” as an issue, they oppose dealing with it through legislation for a variety of reasons, the most fundamental being that such laws give the government the right to ask why a woman is having an abortion, and to punish her or her doctor based on it.

Several Sanders supporters pushed back on that article, some calling it an “imaginary issue,” which it is not. Eight states have already enacted such laws, and at least one is headed for the Supreme Court. But many Sanders supporters criticized Todd for his framing of the issue, which, despite Sanders’ wholly unacceptable response, is valid.

Choosing to press Sanders on a fringe anti-choice issue, twice in the space of fewer than two minutes of discussion on the issue, was a choice. Amplifying the issue uncritically, and with the clear suggestion that it be dealt with legislatively, was a choice. The fact that he elicited such a revealing gaffe from Sanders doesn’t remove from Chuck Todd the duty to responsibly inform his viewers, which he did not. In fact, had Todd been better informed on the topic, he could have and would have called Sanders out for his answer.

But Todd might have been forgiven this negligence had he applied similar rigor, or any rigor at all, to his Republican guest, Sen. Tom Cotton (R-AR). To begin with, Todd gave Cotton nearly six minutes to spread filth about the issue, more than triple the 1 minute and 47 seconds he gave to Sanders. (Chris Wallace, despite his missteps, let Amy Klobuchar do most of the talking during their 4 and a half minutes on the topic.)

During his interview with Cotton, Todd utterly failed to press the senator on reams of misinformation, and failed to correct egregious and dangerous lies.

In the former category, for example, Cotton told Todd that Democrats voted against a bill that he described as saying “If a baby is born during an attempted abortion, that that baby has the right to live and the right to medical care, just like any other person does.”

Todd allowed that misleading characterization to sail by, rather than at least ask why such a law would be necessary since such protections are codified in existing law, including the Virginia law that the media regularly allows Republicans to lie about.

And he allowed Cotton to repeat the disgraceful and dangerous lie that Democratic Virginia Governor Ralph Northam “proposed potentially even euthanizing children that are born during an attempted abortion.”

In a call-back to his earlier failure, Todd also chimed in with agreement when Cotton asserted “we have some horrific practices that are now possible by medical science, such as screening for abortion for people who may want to select for a male child instead of a female child…”

Unfortunately, Todd’s abysmal performance doesn’t stand out much from the rest of the media’s coverage of abortion rights. Since the Ralph Northam controversy reignited this debate a few months ago, the failures have been staggering.

Time after time, media figures have either failed to call out the Trump-escalated lie that Democrats want to execute babies, or even repeated the lie themselves.

This is not a knock on Powers or Quinn, or any of the other women who participate in these panels who, by virtue of being women who wish to protect their own civil rights, must necessarily develop expertise in the subject. But I’m sure they would all agree that more guests armed with facts would be a good thing, as would fewer guests like Rick Santorum.

That would be a good place to start, as would news anchors like Chris Wallace and Chuck Todd becoming well-versed in this life-and-death topic before they do any more harm.