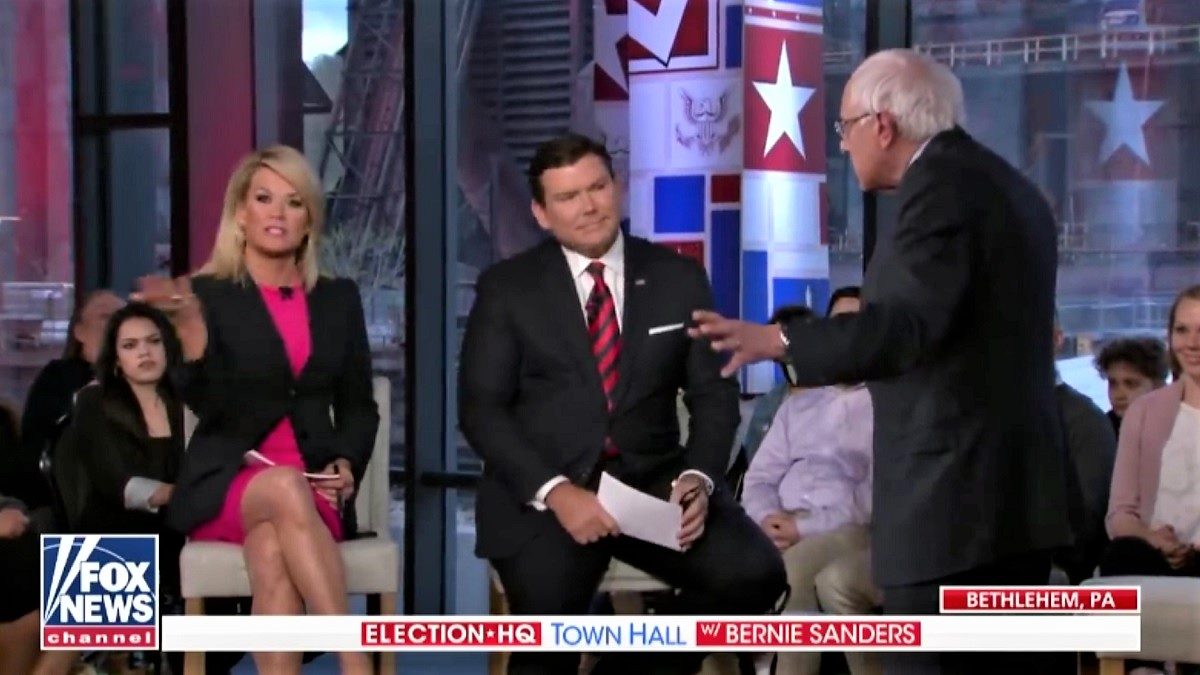 Independent Vermont Senator and Democratic presidential candidate Bernie Sanders bucked many of the network’s critics by appearing at an hourlong town hall moderated by Bret Baier and Martha MacCallum Monday, and the result was clarifying on a number of fronts. Here are the lessons Democrats should learn from the Sanders town hall.

Sanders is getting generally high marks for his performance, and I would agree with analysts who say that overall, the net effect was positive for Bernie, politically. Particularly on the issue of health care, Sanders was effective at countering right-wing (Fox News) talking points. Democrats can learn a lot from his successes, as well as his missteps.

But there are also lessons to be learned about the Fox News moderators, and how their performance relates to the separate questions of whether Democrats should appear on the network, and whether the Democratic National Committee should reconsider allowing the network to host debates.

Lesson One: Bret Baier and Martha MacCallum Are Not Regular Journalists

Fox News has pushed back against the DNC’s ban by suggesting that its non-“opinion” journalists are just like every other objective journalist, citing Baier and MacCallum as examples alongside people like Chris Wallace.

As I have written before, I could be persuaded that Wallace or Shepard Smith would conduct a fair debate, but Baier tipped his hand early on Monday night by describing Bernie as part of a field of “Democrat candidates,” which is how right-wingers refer to the field. It’s a version of the childish “Democrat Party” label that Republicans have pushed for years.

Real journalistic outlets like CNN and the Associated Press refer to them as “Democratic candidates.”

Baier also combined two Fox News-y characteristics when he chided Sanders for attacking Fox News when Sanders had not actually attacked Fox News. About 15 minutes into the town hall, Baier urged Sanders to “get over the Fox thing.”

But Sanders actually spent much of the town hall defending his appearance on the network, and seven times referred to the questioning from Baier and MacCallum as “fair.” When Baier said that, Sanders had just finished specifically saying he was not criticizing Fox News.

But that “get over the Fox thing” was played over and over again the next day as an example of Baier dunking on Bernie.

Baier and MacCallum showed their true colors throughout the night by consistently pushing right-wing talking points in their own voices, rather than with the “critics say” or “some would argue” language of journalism. They weren’t playing devil’s advocate, they were just advocates.

MacCallum was particularly guilty of this, essentially heckling Sanders on multiple occasions, most egregiously by pushing Donald Trump‘s plan to send migrants to so-called sanctuary cities. This was not adversarial journalism, it was right-wing advocacy.

But Baier also contributed with earnestly-asked questions that pushed conservative talking points, like the notion that someone who supports higher taxes should individually donate money to the IRS. One of these would up backfiring spectacularly, as he polled the audience for a show of hands, and didn’t get the result he seemed to anticipate.

That Baier and MacCallum are not the straight down-the-middle journalists Fox promotes them as doesn’t necessarily have to be a bad thing for Democrats. Sanders used it to his advantage a few times, like when he turned the question about his tax returns into an attack on Trump, and Baier used it to Democrats’ advantage with that health care question. And facing this kind of barrage can be clarifying for voters, as Sanders’ terrible immigration answer shows (see Lesson Two).

But it is useful information for Democrats to have in deciding whether to appear on the network, which leads us to lesson number two.

Sanders turned the tables effectively a few times, but was caught flat-footed or ill-prepared in several conspicuous moments. His response to MacCallum’s immigration barrage, for example, was a missed opportunity. Instead of calling out the “sanctuary cities” talking point by explaining how those policies make Americans more safe by encouraging undocumented immigrants to report crimes, or advocating for the case management program that had a 98 percent success rate, Sanders simply suggested building more detention facilities at the border.

And earlier in the debate, Baier momentarily stumped Sanders a couple of times, first by asking him why he didn’t turn down the lower tax rate he enjoyed as a result of Trump’s tax plan.

Sanders recovered nicely by turning it into an attack on Trump, but that three-second pause was deadly, and it was a missed opportunity to destroy a longstanding right-wing trope about people who support higher taxes.

A bit later, Baier threw another question at Sanders that he should have anticipated, but for which he was utterly unprepared. Another deadly silence ensued when Baier asked Sanders if the money he made of of his book is actually “the definition of capitalism?”

When Sanders did get around to answering, he didn’t actually explain how his windfall isn’t capitalism, because it is. Had he anticipated the question, he could have responded any number of ways, including by saying it’s an example of the kind of regulated capitalism he supports.

As I said earlier, Sanders spent an inordinate amount of time praising Fox News as “fair,” and was still attacked for supposedly attacking them. If Democrats are going to make use of Fox News appearances, they can’t be afraid to call out egregious right-wing bias like MacCallum’s hectoring, or scientifically inaccurate questions like the lightning-round query about abortions “up until the moment of birth.”

Bernie Sanders seems to have gotten the better of things with this event, but Fox News gained as well by having Sanders legitimize them for an hour. The next Democrat to try this should study this town hall carefully, and adjust accordingly.