Mitt Romney Been Busted: President Obama Did Not ‘Tout’ Government Layoffs In May
Video

Mitt Romney Been Busted: President Obama Did Not ‘Tout’ Government Layoffs In May 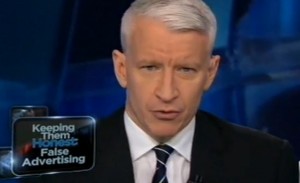 In an attempt to project their candidate’s habit of flip-flopping onto President Obama, the Mitt Romney campaign released an ad on Monday accusing the President of “touting” government layoffs in May, only to bemoan them last Friday. On Anderson Cooper 360 Monday night, however, host Anderson Cooper tried his hand at Keeping Them Honest by revealing that in that May speech, the President was actually scolding Congress for allowing public sector job losses to weaken the recovery.

The President has been taking a lot of political heat for his phrasing of the idea that it is the public sector that’s hampering our recovery from the recession, and not the private sector, which has gained 4.3 million jobs in the last 27 months. Not content with the points that the President’s “the private sector is doing fine” gaffe awarded them, Mitt Romney stepped in it himself while responding to the remark, deriding the President for wanting to put police, firefighters, and teachers back to work.

The ad relied on a 15-second clip from a May 8 speech in Albany, NY, in which the President said “The only time government employment has gone down during a recession has been under me. So I make that point just so you don’t buy into this whole bloated government argument that you hear.”

But as Cooper pointed out last night, the subsequent 10 seconds or so make clear that this wasn’t a boast, it was an attempt to demonstrate the folly of Republican refusal to support public sector jobs during a recession, even though they had done so for every previous, non-Obama president:

Here’s a transcript of a bit more of that speech, which clearly demonstrates that the President was not “touting” government job losses, he was denouncing them: (via WhiteHouse.gov, emphasis mine)

They said no to putting hundreds of thousands of construction workers back on the job repairing our roads and our bridges and our schools and our transit systems.  No to a new tax cut for businesses that hire new workers.  No to putting more teachers back in our classrooms, more cops back on the beat, more firefighters back to work. And this is at a time when we know one of the biggest drags on our economy has been layoffs by state and local governments — that’s true all across the country.

And it’s worth noting, by the way — this is just a little aside — after there was a recession under Ronald Reagan, government employment went way up.  It went up after the recessions under the first George Bush and the second George Bush.  So each time there was a recession with a Republican President, compensated — we compensated by making sure that government didn’t see a drastic reduction in employment.

The only time government employment has gone down during a recession has been under me.  (Applause.)  So I make that point just so you don’t buy into this whole bloated government argument that you hear.  And frankly, if Congress had said yes to helping states put teachers back to work and put the economy before our politics, then tens of thousands more teachers in New York would have a job right now. That is a fact.  And that would mean not only a lower unemployment rate, but also more customers for business.

This is the kind of thing we’ve come to expect from the Romney campaign, but not from this website. Our resident conservative, Noah Rothman, published a piece that used the exact clip that was in the Romney ad, a little over an hour before it was released. Knowing the way this business works, it is obvious that this post was the result of a not-for-attribution tip from a Republican operative (Unfortunately, Noah wouldn’t be able to confirm this without burning a source, albeit one who apparently burned him). The 17-second clip, as it turns out, was uploaded to a GOP YouTube account on Sunday with the headline “FLASHBACK: Obama Wants Credit For Supposedly Firing Government Workers.”

Unlike the Romney campaign press release for the ad, this YouTube page didn’t contain a link to the full transcript of that speech, and while Noah should have checked the speech for context, I believe he didn’t publish that post with the intent to mislead, and that had he seen the transcript, he would not have published the piece as written.

Not-for-attribution pitches are commonplace in political journalism, and they can lead to this type of thorny situation, which is one reason I tend to avoid them. My rule of thumb is that if the source of a not-for-attribution pitch would be a bigger deal than the story they’re pitching me, I won’t use it, which means I almost never use them. What someone wants your readers to know is rarely as important as who wants them to know it, as was the case with the 2008 photo of then-Sen. Barack Obama dressed in so-called “Muslim garb” that was distributed by staffers for then-Sen. Hillary Clinton‘s campaign, a tactic that was outed by Matt Drudge.

As for the flap surrounding the “private sector is doing fine,” the real messaging problem for the President is that he, and the Democrats, continue to accept the Republican premise that there is some yawning chasm between the private sector and the public sector, when Obama’s entire point is that they’re inseparable. Cops, firemen, and teachers don’t shop in public-sector Gov-Marts, they don’t protect and educate the citizens of Public-O-Stan, and they don’t get paid in ObamaBucks. Their 700,000-strong absence from the workforce has terrible ripples in the private economy, and on private life. The sooner the President and his campaign can distill that into a Romney-proof byte, the better.