Echoes Of 9/11? Gov. Had Plenty Of Warning About Christmas Day Attack

Echoes Of 9/11? Gov. Had Plenty Of Warning About Christmas Day Attack 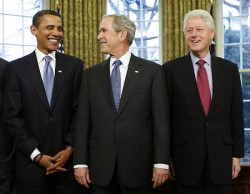 It’s hard not to wonder if the story of Umar Farouk Abdulmutallab may turn out to be the biggest story of the year if it keeps developing the way it does. This thing has got legs, as they say, long ones that appear to be reaching places that haven’t been explored since the aftermath of 9/11. Actually, it’s getting hard not to feel a sense of déjà vu all over again as more of the details come to light, because while the attempted Christmas Day terror attack on Northwest Flight 253 in no resembles the horror and destruction of September 11, 2001, the lack of government preparedness in the face of a whole lot of intel is starting to feel awfully familiar.

This from the front page of New York Times, which expands somewhat on President Obama’s admission yesterday that the government was in possession of information that might have averted the attack (before it was averted by fellow passengers and flight attendants, that is):

Two officials said the government had intelligence from Yemen before Friday that leaders of a branch of Al Qaeda there were talking about “a Nigerian” being prepared for a terrorist attack. While the information did not include a name, officials said it would have been evident had it been compared with information about Umar Farouk Abdulmutallab, the 23-year-old Nigerian charged with trying to blow up a Northwest Airlines flight to Detroit on Christmas Day. The government also had more information about where Mr. Abdulmutallab had been and what some of his plans were. Some of the information was partial or incomplete, and it was not obvious that it was connected, the official said, but in retrospect it now appears clear that had it all been examined together it would have pointed to the pending attack. The official said the administration was “increasingly confident” that Al Qaeda had a role in the attack, as the group’s Yemeni branch has publicly claimed.

NBC’s Chuck Todd additionally notes that “partial info [was available] that al Qaeda was perhaps planning some sort of holiday attack but what kind of attack was unknown.”

So basically, 11 months into the president’s first term, the government had fairly credible information available to it that someone with al Qaeda ties was planning an attack on the States, but for a variety of reasons (none of which thus far are at all acceptable) did not act on it. Which is not exactly the same thing as President George W. Bush being handed a two-page memo during the summer of his first term that warned Osama bin Laden was “determined to strike the U.S.” but it certainly has echoes of it.

All of which, take together, appears to give proof to the fact that the only thing that has made us safer, in the words of one security expert, is that pilot doors are now locked and passengers and attendants are more alert to dangers.

In terms of looking back on a decade that started with 9/11 and is ending with Flight 253, how much does this latest attack change things? Does Bush look less culpable now in the eyes of history for not paying heed to that memo? Or more, because clearly nothing productive has been done in the interim to ensure against further attacks. And how much of a leg will Obama and his supporters have to stand on going forward when he talks security? Yesterday’s audio statement (reportedly audio because the information had just become available to him and he wanted to rush it to the public) suggests that unlike Bush, Obama intends to be as transparent as possible about what is and is not being done. But still, it’s hard not to get the sense that the only people learning from past government mistakes where security is concerned is the flying public.