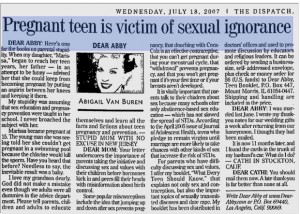 Rick Santorum backer Foster Friess‘ sexist, Abe Simpson-esque joke about the merits of Bayer Aspirin as birth control, during an interview with a stunned Andrea Mitchell, has caused an odd cable news firestorm. The fact that people are shocked by an old man saying something piggish is strange enough, but even stranger is the hilarity, and not-hilarity, that ensues when people don’t get the joke.

In all fairness, it’s not entirely clear that Friess, himself, gets the joke. Last night, he told Last Word host Lawrence O’Donnell that the joke’s humor was simply based on the absurdity, back in his day, of using aspirin as contraception. He also told O’Donnell that he was getting a lot of “hilarious” emails from people who also didn’t get the joke.

In the panel segment that followed, Now host Alex Wagner ably explained the joke. “Well, I was confused when I first heard the advice about the Bayer between the knees,” Wagner said. “I thought that was more about keeping your legs closed and that’s how you stay out of trouble. But apparently there’s some sort of — I don’t know what.”

Rachel Maddow put a finer point on it during her show, referring to the joke as an “insinuation that any woman who doesn’t want to get pregnant is a slut who ought to keep her knees together.”

Whether Foster Friess got his own joke or not, there were others who definitely didn’t, to sometimes humorous effect. Redstate‘s Caleb Howe pointed out one such example, a Business Insider piece on the Andrea Mitchell interview:

I couldn’t tell whether Mitchell was baffled or taken aback, but the reporter who wrote that article was clearly baffled. The above is followed with:

It is totally unclear what Friess is talking about and a quick Google search on links between Bayer Aspirin and contraception was unhelpful, although Bayer does manufacture birth control pills.

Other things to be learned from Google searches: there don’t seem to have been any reliable studies done on the motivations of live poultry in pedestrian crosswalks, nor does the Wikipedia page on firefighters offer any explanation for the red suspenders.

Prediectably, Howe goes on to theorize that “progressives” didn’t get the joke because we’re all horndogs who can’t conceive of ever abstaining from promiscuous sex (I didn’t realize Business Insider was such a liberal rag). Maybe that reporter, and some “progressives,” didn’t get the joke because time didn’t freeze for them in 1950. I can almost hear Foster Friess’ publicist explaining to him, for the hundredth time, that she can’t book him on DuMont.

It (Friess’ joke) was pretty horrifying to hear. Diane Sweet, who runs our Occupy America Blog found this Dear Abby article from July18, 2007 which puts a chilling story to this anti-choice neanderthal’s words and chuckles.

DEAR ABBY: Here’s one for the books on parental stupidity. When my daughter, “Marissa” began to reach her teen years, her father — in an attempt to be funny — advised her that she could keep from becoming pregnant by putting an aspirin between her knees and keeping it there.

My stupidity was assuming that sex education and pregnancy prevention were taught in her school. I never broached the subject with her.

Larissa became pregnant at 15. The young man she was seeing told her she couldn’t get pregnant in a swimming pool because the chlorine would kill the sperm. Have you heard that before? Needless to say. the inevitable result was a baby.

What a joke it must have been to Foster and his pals after he left the set. He probably thought he set Andrea Mitchell straight on the idea of how silly birth control is when all you have to do is grab an aspirin and squeeze. Because for Freiss, contraception is all about slut-shaming women into closing their legs. Is it any wonder that the new poll by the Democracy Corp shows President Obama destroying Mitt Romney in the unmarried women category.

Amato’s assessment of the Republican War on Contraceptives (part of a larger war on women’s health) is spot-on, but the lesson in that Dear Abby letter isn’t that we shouldn’t tell bad jokes. While conservatives will wield “personal responsibility” at that woman’s daughter, her troubles stem from her parents‘ abdication of their responsibilities. Mom’s “stupidity” wasn’t “assuming that sex education and pregnancy prevention were taught in her school,” it was in not teaching her daughter that stuff herself.

Every parent is different. I chose to educate my children about reproduction as soon as they were old enough to ask about it, and reinforced that every time they asked me after that. I felt that it was better to give them the facts long before reason, logic, and the values I was teaching them would have to compete with a relentless biological imperative. You don’t teach fire safety in the middle of a burning building.

Whether you believe in total abstinence until marriage, total free love, or something in between, you’ve obviously got to teach your kids what it is they’re abstaining from. In the 21st century, nobody should be leaving sex education to 50 year old jokes, or blaming them when things go wrong.