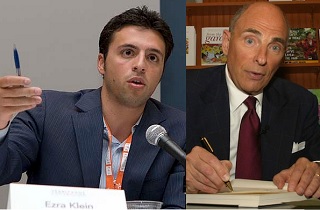 Fox News White House Correspondent Wendell Goler broke news at yesterday’s daily briefing when he asked White House Press Secretary Jay Carney to comment on a report that President Obama has agreed to endorse former Secretary of State Hillary Clinton for president in 2016. The real news, though, is that the source of that report according to Goler, is a new book by The Washington Post‘s Ezra Klein. That should really be news to Ezra Klein, because he hasn’t written such a book, nor reported such a deal.

“Can you comment on Ezra Klein’s book indicating that the President has agreed to support his former Secretary of State in 2016?” Goler asked Carney.

“I confess that I was not aware of that report, but I’ll run out and buy the book or purchase it online,” Carney replied, adding a little dig at the President’s detractors. “I can assure you the President is not thinking about the next presidential election, having just recently won the last one.”

The report Goler is referring to posits that President Obama cut a “secret deal” with former President Bill Clinton, in order to induce Bubba to give the blockbuster nominating speech in exchange for endorsing Hillary in 2016.

Carney can be forgiven for not being aware of the report, or of Ezra Klein’s book, because the report doesn’t come from a respected journalist from a mainstream print publication, after all. The source of the reporting is a new paperback edition of a 2012 book by anti-Clinton crank Edward Klein, excerpted by the New York Post:

President Obama made a secret deal to support Hillary Clinton when she runs for president in 2016, campaign sources say, payback for the support her husband gave him in 2012.

A deal was struck: Clinton would give the key nominating speech at the convention, and a full-throated endorsement of Obama. In exchange, Obama would endorse Hillary Clinton as his successor.

The excerpt contains a good deal of feverishly-imagined palace intrigue, as well, but it was the “secret deal” that grabbed the Post‘s headline. Set aside the fact that this story is akin to Homer Simpson striking a “secret deal” to eat a doughnut, in exchange for first eating a smaller doughnut, or the fact that Klein doesn’t cite even an anonymous source for this silly allegation. Here’s how Edward Klein’s last book about Hillary Clinton was described in the pages of The New York Post, under the headline “Smear For Profit”:

…Klein may offer a few words here or there about Whitewater or Travelgate, but what really floats his boat is the Higham-like notion that Sen. Clinton is secretly a lesbian.

He has no proof whatever for this claim save that she has had some lesbian friends. (So do I. Does that make me a lesbian?) Indeed, Klein even offers the quaint theory that it doesn’t really matter whether Hillary ever acted on her supposed lesbian tendencies. “To be a lesbian,” he lectures on page 63, “it was not necessary for a woman to have a physical relationship with another woman. Such a relationship could be romantic and asexual.”

…We also probably would have heard by now that Bill Clinton learned Hillary was pregnant with Chelsea by reading about it in an Arkansas newspaper. This detail is offered up by a single source — an “investment banker from New York” — in the course of a story about how Bill “raped” Hillary while on vacation in Bermuda in 1979.

Oof! That’s not the kind of guy a legitimate news organization would normally cite in a White House briefing, which is sort of the point. Ezra Klein is that kind of guy.

White House reporters, especially television reporters, often ask questions on behalf of their other colleagues, and have little control over how their questions are used by news editors. Having watched, and respected, Wendell Goler’s professionalism for many years, I find it hard to believe that he would make such an attribution error himself, but whoever thought up that question managed to get a response to an embarrassing piece of reporting, while avoiding being laughed at. That’s a really neat trick, but not a nice one to play on the public, or on your own reporter.