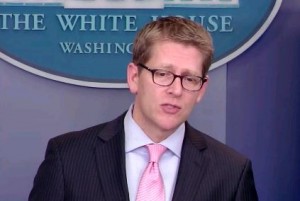 Lately, GOP leading lights Sarah Palin and former Sen. Rick Santorum have taken up the conservative pastime of hiding their anti-gay politics behind the lie that their views mirror those of President Obama. At today’s White House briefing, Metro Weekly‘s Chris Geidner and I tried to get Press Secretary Jay Carney to put some daylight between the President and Santorum on the issue of marriage equality, and while he defended President Obama’s overall record on LGBT issues, Carney was mum on marriage.

Geidner began by asking Carney about Sen. Santorum’s claim that “”President Obama says he has the same position I have on gay marriage.”

“What’s the President’s response to candidates using his position on marriage equality to say that?” Geidner asked.

“I think, Chris, you know very well what the President’s views are on LGBT issues and civil rights, and the President is very proud of this administration’s record on those issues,” Carney responded. Asked to address the marriage issue specifically, Carney said “I have no updates for you on the President’s position on same-sex marriage.  I think that you know and others here know and understand that his position broadly on LGBT issues is quite significantly different from that particular candidate’s views.”

I followed up by asking about former Alaska Gov. Sarah Palin’s narrower claim, that the President’s “position on the definition” of marriage. “Over the weekend, Sarah Palin tweeted out something similar, but the language that she used was very specific. She said, ‘The President position on the definition of marriage is the same as Santorum’s, Gingrich’s and Romney’s.'” I said. “Would that be a true statement?”

Carney responded, “I will just point you to what the President has said and his record…”

“But the President,” I interjected, “he said before that he believed that marriage was between one man and one woman, years ago. And now he says his position is evolving. Would it be fair to say that that definition no longer exclusively…”

Santorum and Palin are dead wrong, of course. First of all, there’s a difference between a personal “belief” and a “position.” President Obama’s political position on marriage equality, as expressed in his consistent calls for a repeal of DOMA and his decision not to defend same in court, is that marriage is not exclusively defined as the union of one man and one woman. As for his personal beliefs, his statements that they are “evolving” indicate that, although he hasn’t stated an affirmative belief (which he ought to do; I hate to admit it, but Santorum is right about that), they no longer exclude the possibility that same sex couples could fit that definition.

For a little over a year now, ever since President Obama told ABC News’ Jake Tapper that his feelings about gay marriage were “constantly evolving, reporters like me and The Washington Blade‘s Christopher Johnson (who amusingly shares the name of the alien protagonist of the film District 9) have pressed the White House on the President’s marriage equality position, and we’ve gotten the same responses: a summary of President Obama’s record on LGBT rights, and Carney’s assurance that he’s “not going to break any news” on the subject.

That refrain, about not “breaking news” on the subject, indicates that the President will break news on it at some point. As I told Carney a few months ago, any reasonable person could easily conclude that the President’s beliefs have already evolved to include same-sex marriage, and he just hasn’t said it out loud. He has taken a lot of guff over that evolution, so it stands to reason that he would want to gain maximum benefit from his emergence from the marriage equality chrysalis. He will likely drop the news at a point in the 2012 campaign that will give him the maximum bump.

If he’s smart, though (and he is), the President will peg his announcement to some major policy initiative, even a symbolic one like a push for a repeal of DOMA. Simply declaring that he’s come around won’t engender much goodwill after so much time on an artificial fence. Better yet, President Obama could reject the awful states’ rights argument he evoked earlier this year, and support a federal marriage amendment that includes same-sex couples.

Here’s the clip of Geidner’s question, followed by mine, from today’s briefing, via The White House:

(Note: I know it sounds like Jay Carney mistakenly called me “Neal,” but in fact, he was just using an insider nickname. On the DC pickup basketball circuit, I’m known as “Neal” because my mad dribbling skills remind people of Curly Neal.)