Can Keith Olbermann Win A War With MSNBC? 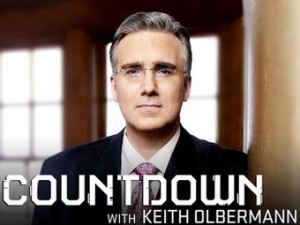 It was always an obvious reality that Keith Olbermann‘s Current TV show would experience some degree of crossover with MSNBC’s prime-time programming, but any hope of a peaceful rivalry has evaporated, as Olbermann has made it clear he intends to go after his former employer’s audience by going after his former employer. The fact that Olbermann has opted to “go negative” so early (his show hasn’t even premiered yet) portends a bloody battle for the hearts and minds of liberal viewers.

The establishment of Current TV as a destination for liberal news programming doesn’t necessarily have to be a bad thing for MSNBC. There are, apparently, millions of liberals who aren’t watching cable news, and this represents an opportunity for both channels to attract a new audience.

Given the details of their split, it’s not surprising that Olbermann would express some (relatively mild) bitterness in the aftermath of his exit, but in recent weeks, his shots have been more directly aimed at some of his former colleagues, plus more intent on poaching the network’s audience…and their talent?

At first, Olbermann confined his disapproval of his former network to sporadic, mildly passive-aggressive tweets about not watching the network anymore, and grammar-copping former colleagues. About a month ago, though, Olbermann ripped MSNBC host Ed Schultz for daring to disagree with (Current TV/Countdown contributor) Michael Moore, calling Schultz a “supposedly liberal commentator, on a supposedly liberal network.”

In later comments to The Hollywood Reporter, however, Olbermann removed any doubt that this shot was aimed squarely at former colleague Rachel Maddow, whose obvious respect and admiration for Steele must have played a role in his hiring. “There were lots of people who were forced to choose sides,” he told The Hollywood Reporter, “And particularly in Rachel’s case, I didn’t want to add to the pressure on her already. The last thing I need to do is be calling her up and saying, ‘How’s that Michael Steele working out for you?’”

For a guy who doesn’t want to add to the pressure on Rachel Maddow, Olbermann sure has a funny way of showing it. In a recent interview with the Associated Press‘ Frazier Moore, Olbermann openly suggested that he would poach Maddow away from MSNBC at the first opportunity (a suggestion that also turned up in a recent Rolling Stone article):

Maybe Olbermann will find himself another Rachel Maddow, the liberal host who clicked with viewers on MSNBC after Olbermann brought her aboard for a companion show to his at that network.

Sure, nods Olbermann. “Or conceivably,” he says suggestively, “I might just find the SAME Rachel Maddow. You never know.”

While I’m sure there’s a passage in The Art of War dedicated to just this sort of mind game, such a statement is surely not designed to make things more comfortable for Maddow at MSNBC.

There has been pop-psych speculation about an All About Eve dynamic between Olbermann and Maddow, as the student rapidly eclipsed the master. While this doesn’t quite equal a shove down the staircase, Maddow might not appreciate being made a pawn in this game. True to gracious form, she hasn’t commented about this, but Olbermann’s revelation that they haven’t spoken since his exit speaks volumes. “Send to voicemail” goes both ways.

The contrast between Olbermann and Rachel Maddow seems to be at the heart of the two networks’ branding efforts. While Olbermann clearly sees himself as the curmudgeonly mentor here, Maddow’s star has risen on the strength of her willingness to engage the other side, a trait for which Olbermann slams her, but one which has earned her the respect and admiration of centrists on both sides of the political spectrum. That sensibility runs through most of MSNBC’s opinion programming.

Joe Scarborough, host of the influential Morning Joe, usually stakes out center-right territory, while engaging a variety of panelists and guests from across the ideological spectrum. The Last Word‘s Lawrence O’Donnell has a decidedly farther-left point of view, and a more confrontational style, but he also frequently features guests and panelists from the right (O’Donnell’s warm sentiments for Olbermann, alas, have only garnered him a chilly mention as “my replacement” in that Rolling Stone interview). Even liberal firebreather Cenk Uygur engages the right on his 6pm show, and while Ed Schultz‘s The Ed Show has the vibe of a Drinking Liberally meeting, his sensibility is more rooted in an affinity with working-class liberals than in a smug contempt for “the enemy.”

Olbermann, on the other hand, disdains engagement with conservatives, or anyone with whom he strongly disagrees. While he claims such engagement isn’t “illuminating,” his critics paint this refusal as an acknowledgement that the result would be Olbermann’s transformation into a Swiffer Wet Jet™.

As Patrick Gavin‘s review of Olbermann’s Twitter feed indicates, those critics might be on to something. While Olbermann is an undeniably gifted writer, his sub-playground exchanges with Twitter critics display a weakness for real-time debate, and a skin so thin it makes Sarah Palin look like an armadillo.

There’s nothing wrong with knowing your own strengths (Countdown never suffered from its lack of divergent viewpoints) and weaknesses, but attacking a group of people who still profess respect and admiration for you is a risky strategy that could alienate viewers, and industry allies. Countdown will surely improve upon Current TV‘s 50,000 or so average prime-time viewers, but if the linchpin in Olbermann’s strategy is to vanquish an MSNBC lineup that has barely skipped a beat since his departure, Current‘s prospects look to be severely limited. Essentially, the strategy seems to be “the friends of my enemy will become my friends.”

MSNBC, on the other hand, seems well-positioned to weather the challenge. The network is no stranger to negative attacks by competitors. Their “Lean Forward” ad campaign prompted responses (from both Fox News and CNN) that only served to underscore the campaign’s impact. They played hardball with Current TV new-hire David Shuster when they got wind he might be looking to greener pastures at CNN. As far as Olbermann’s impending debut goes, the network has remained tight-lipped. When asked about possible audience defection, MSNBC’s Vice President of Prime Time Programming Bill Wolff would say only, “Our goal remains the same – focus on being awesome at what we’re doing.”

There is a clear path to success for Current, but it doesn’t figure to involve trading body blows with MSNBC. With Countdown as its anchor, there is plenty of camera-ready liberal talent out there (Thom Hartmann, Sam Seder, Bill Press, and for late-late nights, Mike Malloy) who would fit in well with Olbermann’s leftier-than-thou ethos, and an opportunity to build an audience that’s currently not swimming in the cable news waters. I think most liberals would agree that two healthy liberal networks are better than one.