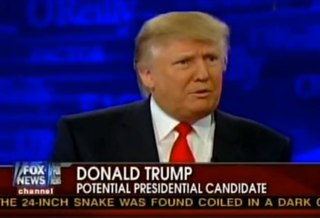 Donald Trump may be the only person in America to consider President Barack Obama a jingoist. In the final installment of his interview series with Bill O’Reilly the real estate magnate turned reality TV star turned 2012 hopeful pulled no punches on the President’s foreign policy in the Middle East, calling the perception of Obama as a non-interventionist erroneous given that “every time I look he’s going into another country.”

While yesterday’s interview segment focused on his interest in the President’s birth certificate, this time around O’Reilly quizzed Trump on issues that he would have to realistically face as President, particularly the struggle for stability in the Middle East. Trump apparently found the Bush doctrine of promoting democracy for democracy’s sake in the Middle East preposterous, noting that, in the old days, “when you won victories, you win… to the victor go the spoils.” He noted that leaving Iraq in the recent future would be an unwise move because it would give Iran space to attempt an invasion for control of the oil fields, and America is “not going to have enough heart to go back.” “If Iran is going to take over the oil, we stay and we keep the oil,” he argued simply. The objective, he said, was to “pay ourselves back a trillion and a half dollars more… and don’t be so stupid” that America invested in the Iraq war.

Calling himself a war scholar since “my whole life is a war,” Trump reiterated several times his belief that no war is complete without bringing something home. “A country goes in, they conquer, and they stay. We go in, we conquer, and we leave it to people we don’t even know.” This concern most vividly appeared with the current situation in Libya. Here, Trump argued that the Arab League should be paying America’s military costs– a point with which O’Reilly agreed– and noted his perception of President Obama as a warmonger. “Our weak president that kisses everybody’s ass is in more wars than anybody else,” he noted, sighing, “you’re talking about me like I’m a warmonger.”

While, as a businessman, Trump’s forte will always be in economic issues should he choose to run in 2012, his foreign policy rhetoric proved significantly more presidential than his complaints about Obama’s birth certificate, and will win him points among the more hawkish on the right and perhaps even corroborate his economic rhetoric.